Ashamed of being straight

Ashamed of being straight 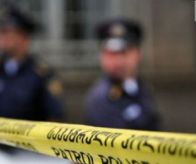 A trans gender woman was killed in Tbilisi Tuesday. (Interpressnews.)

I am lucky to be born straight. I am lucky to be one of those people who are not stigmatized on the basis of their sexual affection to a certain human being; who can kiss and hold hands in public without being attacked or bullied for it; who can get officially married and raise children if they choose to.

But not everyone is as lucky as I am. I am ashamed of what LGBTQ community has to go through just because of us, the straight people. We are so narrow-minded, that we can not appreciate the differences and we opt to judge, instead of trying to understand. We justify our actions with words such as ‘traditions’, ‘nature’, ‘values’, ‘real family’, ‘religion’ etc., even if for many of us these words sound as empty as a hollow tree.

Why was she killed?

88 percent of the Georgian population claims that homosexuality can never be justified. It makes me wonder, does this widespread attitude have anything to do with the recent murder of a transgender woman in Tbilisi? Was she killed because someone really despised and hated her due to her gender identity?

The officials say – ‘no’. Apparently, the crime happened because the victim did not pay her debts in time. However, Identoba points out that the police in Georgia tend not to classify homophobic crimes as hate crimes.

But even if this brutal crime has nothing to do with the victim’s gender identity or sexual orientation, it still does not erase the fact that homophobic Georgia most likely does not feel like a real home to many LGBTQ individuals.

Imagine your life in Tbilisi when every second person thinks that your rights should not be respected, and a third of them think that you do not even deserve the same rights as anyone else. Also, one out of three of Tbilisi’s inhabitants would not want to live next door to you. But hey, good news – you can change your sexual orientation, right? At least half of Tbilisi thinks so.

These are just numbers. But they hide individual stories – for example, constant fear that your landlord will learn that you are not straight and you will end up in the street; that your boss will hear rumors and you will lose your job; that your friends, family and coworkers will never understand the real you… And that you might be attacked at any moment of your day, either physically or verbally because you held your partner’s hand or kissed them when someone else saw it.

No wonder that due to hatred, aggression and rejection from society, LGBTQ youth are four times more likely to commit suicide than their straight counterparts. And with each time when a young gay, bisexual or transgender person is physically and verbally harassed, the likelihood of self-harm increases by 2.5 times.

LGBTQ in the world’s population

It used to be widely believed that 1 out of 10 people belongs to a sexual minority. To be fair, it is quite difficult to get accurate results even from the most representative surveys. First of all, homosexuality, bisexuality and gender identity, that does not match one’s assigned sex, is a social stigma. Secondly, a large part of LGBTQ individuals do not come out even to their closest friends or family, which means that they most likely would not confess it to a researcher. To complicate matters even more, sexual orientation and identity are extremely subjective categories;  even if I think that someone is gay, it does not mean that they are.

Nevertheless, let’s look at some numbers.

In the United Kingdom, almost 2 percent of adults identified as homosexuals or bisexuals; 1.3 percent identified as having ‘other’ sexual identity, and 3.6 percent refused to answer the question. This sums up to almost 7 percent of entire population who did not identify as heterosexuals.

At this point I want to stress out that I follow those scientists who state that sexual orientation is at least partially determined by biological factors. In such case, the example of the United States can be used for further speculation on a general percentage of LGBT people in any given country. Why? Because we are all Homo Sapiens, and under all cultural and societal layers we are all the same; and the United States provide a diverse sample of the human population.

We can estimate that in Georgia, 3.8 percent people would be homosexuals, bisexuals or transgendered as well. According to the National Statistics Office, there are about 4.5 million people living in Georgia, which puts an estimated number of LGBTQ individuals to 171,000 people, or the population almost the same size as the third largest city, Zugdidi (177,000).

Maybe this number is too big? Even if LGBTQ community would comprise just 1 percent of Georgia’s population, there would be 45,000 of them. As many people as live in Upper Svaneti.

Most likely, they could name at least one. It shows that either our calculations are wrong, or that people opt to hide their sexual orientation, as revealing it can have more negative consequences than admitting being Svan or Megrelian. And it is also up to us, the ‘normal’ heterosexuals, to change that.