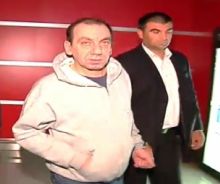 TBILISI, DFWatch–A former officer in Georgia’s Interior Minister has made another plea agreement in return for testifying against one of the allies of Mikheil Saakashvili.

Oleg Melnikov used to be an officer in the previous government’s possibly most powerful body, the Constitution Security Department, commonly referred to as Kudi.

He will have his five year sentence reduced to two years in return for giving testimony against Data Akhalaia, who used to chair Kudi and who left Georgia shortly after the National Movement’s defeat in the 2012 parliamentary election.

The case concerns a murder in the Tbilisi restaurant Dzveli Sakhli. Investigators claim Data Akhalaia, together with other Interior Ministry officials including Melnikov, severely beat two officers. The reason allegedly was that the two had an argument with the wife of former Interior Minister Vano Merabishvili, Tako Salakaia.

It is also worth mentioning that Data Akhalaia, Oleg Melnikov and Tako Salakaia are also related to another, more high-profile case: the murder of Sandro Girgvliani, a young banker. This case, which took place in 2006, caused great political controversy and played an important role in discrediting Saakashvili’s government.

The conflict took place in one of the fashionable bars in downtown Tbilisi, when 28-year-old bank employee Sandro Girgvliani had an argument with the other guests who were having a party, where Akhalaia, Salakaia and Melnikov were present with a few other Interior Ministry officials.

Afterwards, Girgvliani left the bar. Then he was taken by the Interior Ministry officials to a field outside of the city and tortured, as a result of which he died. His friend, who was also beaten, survived.

The police attempted to gloss over the murder, but this led to a big controversy and they were forced to arrest the four persons who performed the murder, four policemen, who spent a few years in prison, allegedly in priviledged conditions, until Saakashvili pardoned all of them.

No-one was detained for giving the order to kill Girgvliani, so Akhalaia, Melnikov and Salakaia, who were considered organizers of this crime, were never held responsible for the murder.

This murder and related events caused harsh criticism of the former Interior Minister and the government. Merabishvili is charged in this case and is in detention now facing many other charges.

The court verified that Merabishvili organized falsification of evidence in the Girgvliani case and cover up the participation of Data Akhalaia in this case.

The European Court of Human Rights ruled on April 26, 2011, that the government must pay EUR 50,000 for moral damages to the plaintiffs.