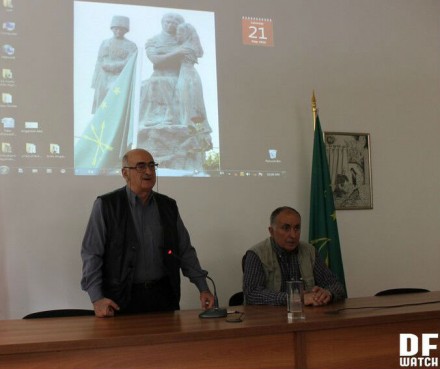 A conference held in Tbilisi (DFWatch)

Tbilisi, DFWatch – A group of Georgian and Circassian activists commemorated the symbolic anniversary of the ethnic cleansing of Circassians by the Russian Empire in the 19th century, marked internationally on 21 May. The activists from the Circassian Cultural Centre in Tbilisi visited the monument dedicated to the victims of the Circassian Genocide in the village of Anaklia, right at the border with Abkhazia, where they laid wreaths.

At the organisation’s headquarters in Tbilisi, a conference was held during which scholar Ketevan Khutsishvili presented her research on Ubykhs, a nation which was native to modern-day Sochi area, scholar Levan Kochlamazashvili presented his research on the extinct Hattic language, which according to some linguists could have been related to the Circassian language, and Mariam Bezhitashvili presented the latest work on biography of the 19th century’s Circassian activist, historian, and poet, Shore Negume.

‘We don’t know exactly how many Circassians reside in Georgia, but we can probably speak of 500 persons. We cooperate closely with Circassian diaspora organisations across the world, although to be honest we don’t have many connections with the ones in the North Caucasus, who tend to avoid such contacts because of fear of repressions. Active Circassian campaigners in the North Caucasus, whose number I estimate at fifty, often aren’t allowed to travel abroad, have difficulties in engaging in business, and are an object of intense interest of the FSB’, professor Nugzar Antelava, the research coordinator at the Circassian Cultural Centre told DF Watch.

According to Circassian nationalist campaigners, the ethnic cleansing of Circassians committed during the Russian conquest of the Caucasus constituted an act of genocide. The campaign for an international recognition of the genocide gained momentum before the 2014 Winter Olympics in Sochi. The activists argued that the venue of the main sporting events, Krasnaya Polyana, corresponded to the site of a major massacre of Circassians in what was once the village of Atquaj on 21 May 1864.

Following the Circassian forces’ defeat, the population of the area spanning modern-day Krasnodar Kray, Adygea, Karachay–Cherkessia, Kabarda–Balkaria, and Abkhazia, which included ethnic Ubykhs, Circassians, Abkhaz, and Abaza was deported en masse to the Ottoman Empire. The survivors of the deportation scattered across Turkey and the Middle East. Georgia is the only country in the world which formally recognised the mass killing and displacement of Circassians as an act of genocide. The 2012 act was widely interpreted as having been aimed at a direct political gain rather than having been justified by moral concerns. As with other claims to genocide in the Caucasus region, the issue remains heavily politicised and the use of the term has been rejected by the Russian authorities and the majority of Russian academia.

21 May is marked in Abkhazia as the Day of Memory of the Victims of the Caucasian War. Several events were held in Sukhumi in connection to the anniversary, including wreath laying at the monument to the amhajyrtswa (‘victims of the deportations’), a march, a play by poet Rushbei Smyr shown in the Abkhazian State Drama Theatre, and lighting candles at the beach in Sukhumi.