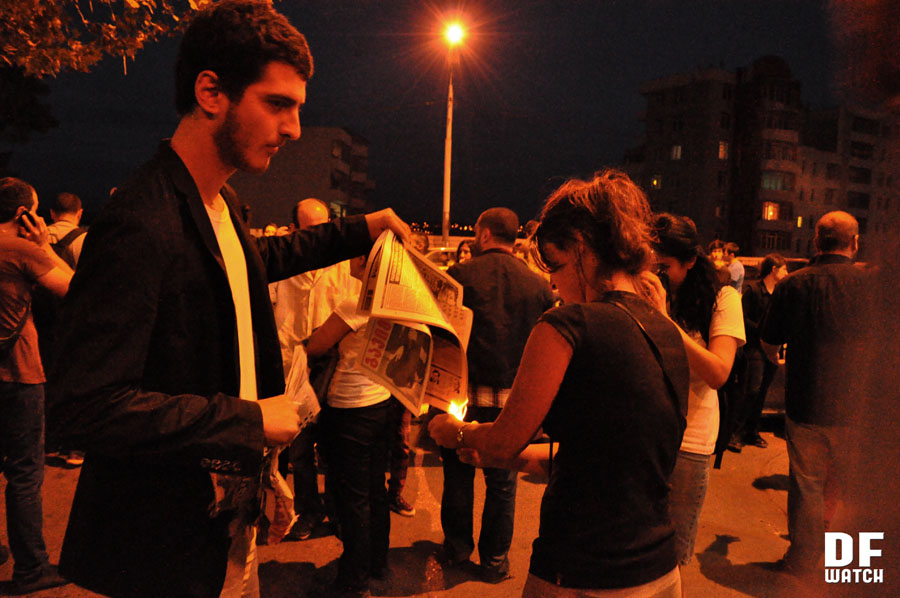 Protesters burnt copies of newspaper Asaval-Dasaval after it had published names and addresses of prison employees. (DFWatch photo.)

TBILISI, DFWatch — One of Georgia’s most popular newspapers on Wednesday revealed the identity of guards working in a controversial prison where serious abuse was revealed two weeks ago.

The list shows the names, address and date of birth of prison guards and employees working at Prison Number 8 in Gldani, where most of the torture has taken place. This is the place videos were made last spring which shocked Georgians when they were shown on TV September 19.

The newspaper, Asaval-Dasavali, is now heavily criticized by some, mostly residents in the capital. Being opposition leaning, the newspaper in today’s edition printed in giant red ‘We have won’ accompanied by a big picture of Bidzina Ivanishvili, the apparently victorious Georgian Dream leader kneeling in church holding a candle while praying.

Celebrating the victory in the parliamentary election, which Georgian Dream won by 55% to 40%, the paper suggests to readers that they should be aware of the prison guards who may have engaged in torture. What follows is a list of names, surnames, date of birth and address of prison guards across four A3 pages.

Laboratoria 1918, one of the youth groups behind the demonstrations against prison torture, now demand that Asaval-Dasavali apologizes and recalls this edition from newsstands, arguing that publishing names of prison staff is incitement to violence.

Students, members of youth organization, well-known people like film critics, singers and artists gathered today at Zhvania Square, a few hundred meters away from the newspaper’s office. With ‘The system should be destroyed’-posters they demonstrated outside the office, where another group of students already have been gathered. 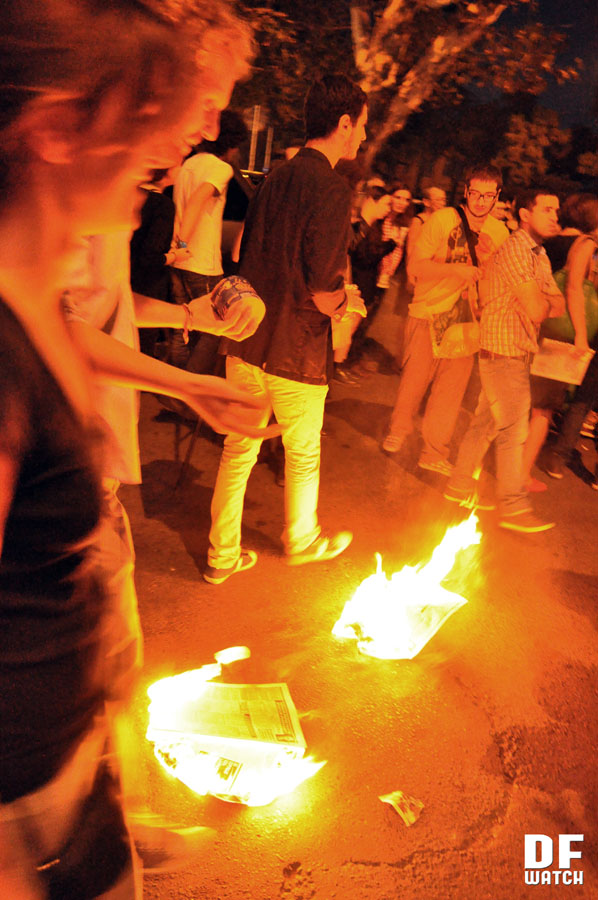 A few students arrived at the office earlier. One of the paper’s editors and some employees came down to talk to the crowd, and it soon turned into a heated discussion.

“Why would you fight violence with violence,” they told the newspaper’s representatives, who answered that the goal of the article was not to continue the violence, but to stop it. The article’s headline was ‘Recognize the butchers’, the point being that the same prison staff are still working at the prison, and that the torture hasn’t stopped.

Several priests also came to the newspaper office, as well as members of a radical group calling themselves Orthodox Union of Parents, which is known for resisting peaceful rallies against homophobia, Halloween celebration and other events, which they think is not correct to hold in public.

The priests kept calling for everyone to discuss this issue in a more calm environment with experts and representatives of all parties.

Those protesting against the newspaper also think that publishing the list puts the families of guards in danger, in other words people who may have no connection themselves to the torture. They demand that the paper apologizes and waits until appropriate bodies have investigated separate cases and defined who is guilty and who not.

The parties in the dispute did not reach a consensus. Instead, they shouted at each other.

“Where were you when we protested on May 26, in November of 2007, why didn’t you protest?” a journalist for the newspaper asked protesters, who answered they were standing with the others during those events and now they still want to find justice.

The protesters decided to leave the place to avoid provocation. Priests, newspaper employees and Georgian Dream supporters accompanied them clapping while leaving, while one employee took newspapers from the office and distributed it to th eyouth. Some even burned the newspaper, and this led the newspapers employees to start shouting.

The students then left, deciding to file a complaint against the newspaper for inciting violence and putting some families in danger.

The prison ministry today responded to what the newspaper has done by writing that ministry has never made public the names of employees at Prison Number 8 in Gldani because it is not allowed by law.

«We call for society if they have any kind of information about prison employees committing crime, to inform appropriate investigative bodies and don’t let personal communication with those people or their family members with a goal to have some kind of influence or punishment.”

The ombudsman also responded to this incident writing that the information printed in the newspaper gives opportunity to fully identify persons, and that this may cause aggression towards those people and their families.

“Identification of people involved in crime is the prerogative of law enforcement bodies,” the statement says.

The ombudsman calls on media outlets to be careful while reporting information which may create a threat to innocent citizens.”