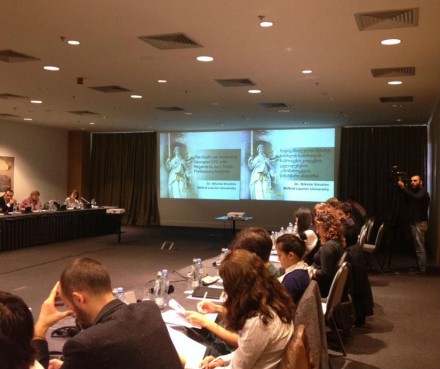 Tbilisi, DFWatch – Legal experts, lawyers, judges, and non-governmental organizations gathered at Holiday Inn in Tbilisi to discuss draft amendments to the Code of Criminal Procedures concerning jury trial worked out by the Ministry of Justice.

Preliminary report prepared by Canadian legal expert on the issue was at the center of the discussion.

In his presentation Nikolai Kovalev, of Wilfrid Lourier University Associate Professor of Criminology and an expert on comparative criminal justice, law reform and international human rights, said that although the existing legislation grants right of the jury trial to everyone accused for a crime which is punishable by deprivation of liberty, the draft suggests reducing types of such crime to only 24, out 140. Other crimes, some of them punishable by up ten years in jail, are not included in the list.

Even after meetings with the government officials and at the Supreme Court, he couldn’t find answer how the authors of the draft selected those 24 crimes and ignored others, Kovalev said at the conference organized by the Open Society Georgia Foundation on Friday.

Another issue concerns an article in the draft that removes a ban on policemen, lawyers and investigators to be elected in the jury. This might create grounds for the lack of impartiality, Kovalev thinks.

The next issue is about openness of the jury members’ selection procedures. Kovalev suggests that if the potential jury members have problems with their personal details, their names can remain secret during selection, but shutting down the process altogether may not be the best way out of the situation.

Ministry of Justice also proposes to change the form of the jury decision format, requiring more specifications in the verdict, some of them necessitate legal knowledge to some extent. Currently it can issue a general verdict, simply stating whether the defendant is guilty or not guilty. Kovalev raises doubts this might cause confusion as the jury members are not expected to have mandatory legal background.

Giorgi Burjanadze, a lawyer at OSGF, leading the discussion, raised concern over possibility to appeal decision made by the jury at the Appeals Court where a single judge is entitled to abolish it.

Another concern is that whereas the defendants are granted right to request jury trial throughout Georgia, the draft offers  this option without restriction only in several cities – Tbilisi, Batumi, Poti, Rustavi, Telavi and Gori. High Council of Justice will issue permission for a jury trial elsewhere in the country.

Nikolai Kovalev stated that his report was not finalized as he kept on collecting information and opinions from the judges and government representatives, as well as legal experts. He expects to deliver final report and recommendations in ‘several weeks’.