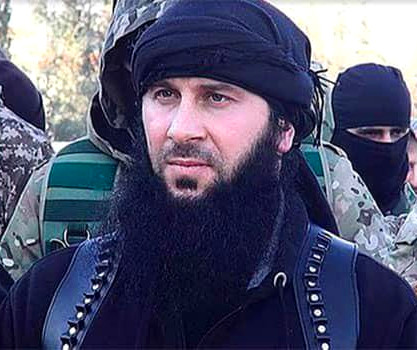 Reports by Syrian and Lebanese news agencies said Salahuddin al-Shishani, was killed during a Russian air raid near Hama province, in northern Syria.

The reports offered no details about the death of the 39-year old, whose real name was Giorgi Margoshvili.

Margoshvili left behind a wife and three children. The latter currently reside in Pankisi, while his wife is believed to have lived with him in Syria.

In late August 2012, he was involved in the deadly shooting at Lopota Lake, near the border with Russia. The Lopota incident, also known as the Lapankuri shooting, claimed the lives of three Georgian officers and 11 alleged Islamist fighters. However, no charges were brought against him, and he was allowed to leave Georgia soon thereafter.

After appearing in Syria, Margoshvili, or al-Shishani (‘the Chechen’ in Arabic), became head of the once powerful military unit Jaish al-Muhajireen wal-Ansar, consisting mostly of foreign fighters. He took over the leadership in the wake of a rift among the ranks of JMA fighters when many of them, including then JMA leader Tarkhan Batirashvili, a.k.a. Abu Omar al-Shishani, sided with ISIS.

Batirashvili and many fighters from North Caucasus swore allegiance to ISIS in December, 2013, while others, including Salahuddin, remained among the ranks of JMA, which, in turn, was part of the broader coalition of Islamist fighters closer to al-Nusra front and al-Qaeda.

(Batirashvili was eventually killed in 2016, after dozens of news about his death or capture.)

Yet, in multiple videos posted on the Internet, Margoshvili reiterates his allegiance to Dokku Umarov, the head of Caucasus Emirate, and after the latter’s death, to his successor, Ali Abu Muhammad (Aliaskhab Kebekov).

However, after one and half year, Salahuddin was dismissed as JMA commander after a bitter row with its Saudi faction and formed a smaller separate unit comprised mostly of fighters of Chechen, Kist or other North Caucasian origin.

In this video, Margoshvili speaks about the split in JMA and his allegiance to the Caucasus Emirate.