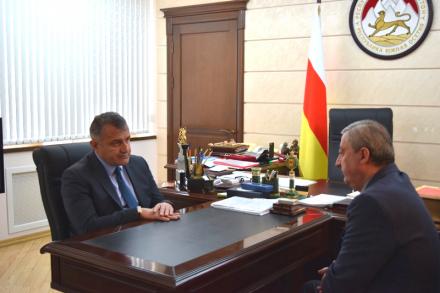 AKHALGORI, DFWatch–The de facto head of administration in Akhalgori, who is known for his anti-Georgian policies, has resigned, but received praise from de facto president Leonid Bibilov, who pledged to find a new job for him in the government in Tskhinvali.

If an ethnic Georgian was coming to the office of Philip Khachirov, he didn’t even listen to them, thus many people in this district which is inhabited predominantly by ethnic Georgians even refused to visit the building of Akhalgori’s de facto administration, local activist Tamar Mearakishvili said.

He imposed harsher policies for people, mainly ethnic Georgians, who wished to cross the administrative borderline between South Ossetia and Georgia proper, actually closing it from 8 pm to 8 am even for ambulances, she said.

In addition, under the Khachirov administration, massive purges were carried out in local schools and kindergartens, kicking out everyone who didn’t speak Ossetian and Russian, including janitors, the activist says.

Khachirov’s name has been named in connection with the high-profile murder of former Georgian soldier Archil Tatunashvili, but he hasn not been indicted by Georgian authorities.

Philip Khachirov was allegedly forced to step down due to pressure from the Leningor office of United Ossetia, the ruling party in the breakaway republic, with which he had had a conflict.

Akhalgori was renamed as ‘Leningor’ after its seizure by the Russian army during the 2008 war. Leningori was the name of the region during the Soviet Union, after the founder of the Bolshevik party, Vladimir Lenin.

Mearakishvili claims that during Khachirov’s tenure virtually nothing was done to improve the situation for locals.

“He didn’t manage to repair a toilet even in the building of Akhalgori administration,” she wrote on her Facebook page.

Tskhinvali-based media allege that Khachirov resignation may be related to the upcoming parliamentary election  in 2019, as while Bibilov seeks re-election, he and his allies may try to win people’s hearts and minds by getting rid of unpopular officials.