After mass amnesty, some ex-prisoners go back to jail

After mass amnesty, some ex-prisoners go back to jail 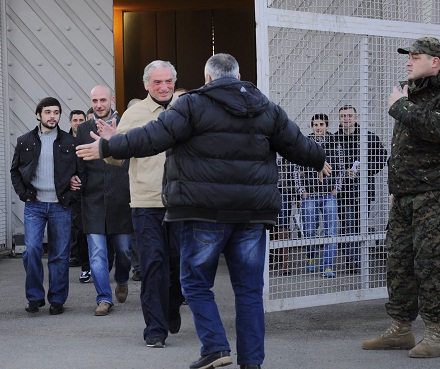 Prisoners released in the 2013 amnesty. (Photo is unrelated to the story in the article.) (Interpressnews.)

TBILISI, DFWatch–Tengiz, a man now in his early sixties, was sentenced to 11 years in jail for burglary in 2007. December 7, 2012, he was pardoned by the president because of a difficult health condition after being recommended by Prison Minister Sozar Subari.

Two days after his release, Tengiz committed an intentional homicide and is now back in jail.

He is one of 70 former prisoners who were pardoned by President Mikheil Saakashvili late last year, and after their release committed another crime. This means that the recidivist rate for persons pardoned was 4.5%.

Also among the general prisoner population, some have gone back to jail, but the rate is lower than for those pardoned, according to new figures from the Interior Ministry. Out of 8 357 released prisoners in the mass amnesty, 80 are now back serving time – less than one percent.

The figures presented by Gharibashvili show that those persons who President Mikheil Saakashvili picked for pardoning were more likely to commit new crime than the general prison population represented by the amnesty. By category, out of those who were pardoned, 289 had been convicted of a less serious offense, 723 serious, and 532 of a particularly serious crime.

At a press conference on Tuesday, Interior Minister Irakli Gharibashvili said that the ministry is ready to take measures if released prisoners commit crime again.

“We don’t want those persons to commit crime again,” he said, and underlined that the ministry will investigate every attempted crime and that the guilty will be punished very strictly.

The interior minister said the amount of crime increased in October and November, 2012.

Gharibashvili promised to hold a press conference in the end of the month to explain in detail how the crime situation has changed in Georgia.

President Mikheil Saakashvili and supporters of his party have criticized the Ivanishvili government for introducing the mass amnesty, which released about half of all prisoners. The president refused to sign the law twice, because he thought it would increase crime in the country and endanger the population.