Adjara gets a new leader

Adjara gets a new leader 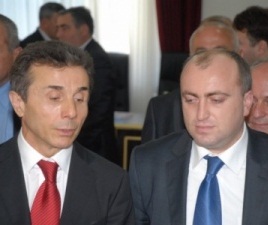 The new leader of the Adjara region in southwestern Georgia is Archil Khabadze, former Adjara regional director of Cartu Bank, which is affiliated with the new prime minister.

Three candidates were considered for the post: Jemal Putkaradze, member of the Supreme Council of Adjara from Georgian Dream, who won through proportionate election, Archil Khabadze, Chair of Cartu Bank in Adjara and Armaz Akhlediani, founder of Georgian School of Political Studies, but he declined the offer. The school has been funded by the European Council for the last 12 years.

Prime Minister Bidzina Ivanishvili proposed Archil Khabadze for post of Chair of Autonomous Republic of Adjara on Sunday. He will replace Levan Varshalomidze, who used to hold the post since 2004.

The Adjara region is located on the Black Sea shores bordering Turkey. Batumi the regional center. During the Soviet Union it was made an autonomous region within Georgia. The region’s leader Aslan Abashidze declared itself a separate entity after Georgia declared independence in 1991, and received help from Russia, which had military forces on this territory, in defying Georgia’s central government.

Adjara’s government announced insubordination to Mikheil Saakashvili’s government, which came to power after the Rose Revolution in 2003. They blew up the bridge at the border to Adjara in spring of 2004 and announced isolation. Then there were protest rallies in the region, and eventually the Georgian government managed make force Abashidze resign. He moved to Moscow and still lives there.

Since then Levan Varshalomidze, a person close to the president, was leader of Adjara. In order to approve a new chair of Adjara’s government it is necessary that the president officially presents his candidacy within ten days to the Supreme Council approving him.

The 32 year old’s carreer as economyst started in the bank sector. He has a USD 95 000 bank loan; he has two new residential buildings in Batumi; and he says he will inherit a private residential house from his parents.

Archil Khabadze thanked Bidzina Ivanishvili for declaring trust in him and noted that Adjara will be an advanced region for Georgia.