Adjara changes its decision to allow new mosque in Batumi

Adjara changes its decision to allow new mosque in Batumi 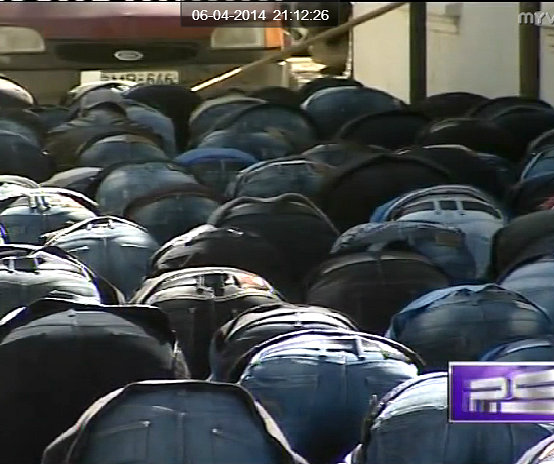 Muslims praying outside the Orta Jame Mosque in Batumi. (Rustavi 2.)

TBILISI, DFWatch–In Georgia’s southwestern Adjara region, authorities have changed their decision to allow the Muslim population to build a new mosque in Batumi, a city on the shores of the Black Sea.

Tens of thousands of Muslims live in different villages and regions of Adjara. Iin some of the villages, Muslims are in majority, but in Batumi they are a minority and have only one mosque in which to pray – Orta Jame Mosque.

The mosque was built in the 1860s. It has become too small to accommodate all believers in recent decades. Muslims have therefore been asking the local government in Batumi for permission to construct a new mosque.

Last year a conflict broke out, because many thought the idea to construct a new mosque was a result of Turkish interference, referring to the agreement between Georgia and Turkey by which Turkey has to maintain Georgian historical monuments on its territory in exchange of Georgia to allow construction of the three new mosques, one of them in Batumi, in the place of Aziz mosque.

Aziz mosque was also built in 1860s, when territory of the modern Adjara was under rule of the Ottomans, allegedly by the orders of Sultan Abdul-Aziz.

Abdul-Aziz was a Turkish leader who for Georgians symbolizes a difficult past. That is why they were against restoring the Aziz mosque, which was destroyed during Bolshevik rule after it was devastated by fire.

Muslims in Batumi have many times said that they don’t want to restore the old Aziz mosque but to build another mosque, to use for prayer, at a different location.

In October, were promised by former Prime Minister Bidzina Ivanishvili and Archil Kabadze, head of the Adjara region, that the mosque would be built in Batumi.

But before that, the local government offered them to expand Orta Jame Mosque in Batumi. This option was also considered.

Murman Dumbadze, a member of parliament for the Georgian Dream coalition, said a few days ago that no mosque will be constructed in Batumi. He said Turkey agrees to renovate Georgian heritage sites on its territory without anything in return, and this was a result of ‘active dialogue’ between the two parties.

He also said that it was not an absolute demand from Turkey to construct a mosque in Batumi.

Dumbadze said there is still a problem with overload of prayers in Batumi, but the issue of expanding Orta Jame is a subject for the Muftis to decide.

The MP told local television TV 25 that the conflict about the mosque in Batumi has been provoked by the National Movement party.

Archil Khabadze on Monday said that the Batumi government has decided to expand Orta Jame Mosque.