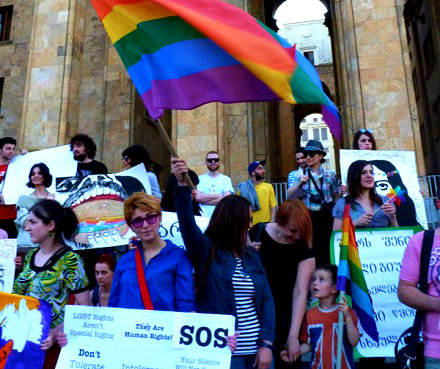 Last year’s demonstration in front of the parliament building in Tbilisi. (DFWatch photo.)

TBILISI, DFWatch–An announced gay rights rally is causing outrage among different groups in Georgia who plan to interrupt the rally May 17 and organize parallel rallies against LGBT people in the country.

Non-governmental organizations which work with defending the rights of sexual minorities announced the rally about a week ago.

May 17 is the International Day Against Homophobia. These organizations, as well as others who support them, will gather at the old parliament building in Tbilisi.

Giorgi Gabedava, one of its members, says this will be ‘a day of protection of honor’. The organization calls on people to signal from their cars if they are out driving on May 17, which will also be a sort of protest. Gabedava also says that he won’t let LGBT supporters conduct the rally.

A few days ago, Identoba and a group of supporters of Women’s Initiatives announced details of their rally at Radisson Hotel, while other people gathered outside the hotel to protest their plans and once again promised that they won’t let this rally be conducted.

Meanwhile on Facebook there are many people gathering up planning to interrupt the upcoming rally, which they think is some sort of Gay Parade and propaganda of homosexuality.

“Of course we won’t start aggression directly on May 17,” Ilia, one of the Facebook users write in one of the groups, saying that rally participants won’t obey ‘their orders’, “and that’s when they will get, when we will tie their hands and feet as a sign of protest.”

The others suggest holding a rally day before May 17.

“Let’s gather up May 16 at five on Rustaveli in front of parliament building and end up liberty of morally unbridled.”

Another group of people plan to gather earlier in the morning on May 17 and organize a rally named Georgian Day.

“This way we resist the immorality planned by Identoba and other organizations,” organizers write.

A few days ago, the Minister of Justice spoke about the upcoming rally at Channel 1 saying that majority of Georgians share position that violence is unacceptable.

“It is not normal when civilized people track each other who sleep with whom,” she said.

Thea Tsulukiani thinks it is not acceptable to attack someone for this, or beat someone, because it is ‘barbarism.’

The minister underlined that everyone has a right of assembly if they do not call for violence.

“Considering that there is tense context I think government, non-governmental sector and human rights activist should conduct their work in two directions: people should finally understand that there exists absolutely protected private life and there is rejection of violence, if we want to be a civilized state and society,” she explained.

Many people continue threats of violence as organizers appeal to law enforcement bodies to take measures in order to avoid incidents on Friday.