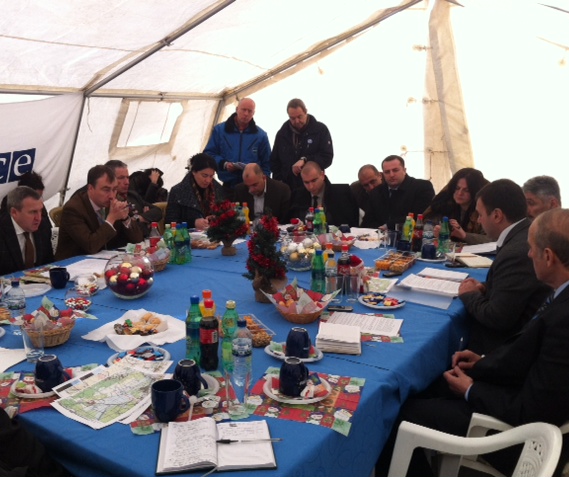 The border meeting as usual took place in a tent at Ergneti. (EUMM.)

TBILISI, DFWatch–The parties in the 2008 Russia-Georgia war Monday discussed the installation of warning signs and fences in the villages Ghogheti and Bershueti on the border to the breakaway region South Ossetia.

This was the 40th meeting of the Incident Prevention and Response Mechanism (IPRM) and was held in the village Ergneti.

One of the issues was the impact the installation of fences and wires is having on Georgian villages in terms of freedom of movement and restricting the everyday lives of locals.

Another topic which was discusses on Monday was access to the cemetery and church in Didi Khurvaleti. Both have been placed on the other side of the barbed wire and fences.

Georgian Interior Ministry spokesperson Kakhaber Kemoklidze asked the representatives from South Ossetia to review the issue of the cemetery and find a solution.

Kemoklidze said after the meeting that the dialogue was ‘pretty constructive.’ He said the Georgian representatives presented material to display what problems the locals have to face because of the installation of fences.

He said that during the meeting, the parties discussed the issue of exchanging detainees. Georgia proposes to exchange them by the end of year.

“In this harsh winter period, the co-facilitators prompted all sides to adopt a constructive approach in duly informing each other about planned activities and finding practical solutions to issues affecting local communities,” EU’s Monitoring Mission (EUMM) informs.