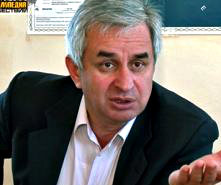 TBILISI, DFWatch–The new de facto rulers of Abkhazia are preparing to prevent Georgians with dual citizenship from voting in the election planned for August 24.

“25-26 thousand people are not eligible to vote in the presidential election unless all issues related to gross violations during the issuing of passports are resolved,” said Raul Khajimba, an MP in the de facto parliament last Friday.

By 25-26 thousand people, he meant the ethnic Georgians, mainly in the Gali region.

“These people must continue building the Abkhazian state with us, but their legal status must comply with our legislation,” he added.

The Georgian population in the breakaway region, which according to a 2011 census number 46,000, were Georgian passports holders until a process to issue them with Abkhazian passports. The so-called passportization process has been controversial among some ethnic Abkhaz, who argued that it threatened national security.

A legal hurdle was made that in order to get Abkhaz passport, a person must document that he or she has renounced the Georgian citizenship. It is also necessary to have lived in Abkhazia for at least five years prior to 1999. This was to prevent returning Georgians from acquiring Abkhazian citizenship. Over two hundred thousand Georgians were forced out of the region in the early 1990s.

But many Georgians kept on to both citizenships, according to International Crisis Group, as the Georgian one makes it possible to travel more easily to Georgia and receive support and services. The Abkhaz passports makes it easier to travel to Russia, which has recognized Abkhazia as an independent state.

The only type of dual citizenship allowed is the one where Russian is one of them, which most of the Abkhaz have.

The passportization issue was the driving factor behind the coup on May 27, led by Raul Khajimba. Sukhumi’s post-coup rulers have now begun preparations to build a database of people who illegally have dual citizenship, which is in violation of the breakaway region’s constitution, Apsnypress reports.

Ankvab fled and later resigned, and region is now ruled by an interim government led by Valery Bganba, with Khajimba waiting in the wings for the presidential election, which he will stand a much better chance winning if he can prevent the ethnic Georgians from voting.

That will be the likely scenario, as the Georgians in Gali are likely to not give up their passports, and thus they will be entered into the new voter’s list as ineligible to vote.

Khajimba is seen as a Moscow stooge and has lost three presidential elections because of the votes of ethnic Georgians in Abkhazia.

First time was in 2004 when he lost to Sergey Baghabsh; secondly in 2009 and thirdly in 2011 in a special election after the death of Baghabsh, when Alexander Ankvab and Sergey Shamba, ex de-facto Foreign Minister, got more votes than him.

The Georgian minority have been living under difficult conditions, because of their ethnic background. Armed groups used to terrorize and rob them, although the threat has subsided in recent years. But civil rights are still restricted. 31 out of the 35 seats in Abkhazia’s de facto parliament are held by Abkhazians, 3 by Armenians and only one Georgian – heavily schewed compared to the population of the region which is half Abkhazians and 18 percent Georgians.

Georgians are also restricted from holding any important posts. In areas where the majority of the population are ethnic Georgians, Abkhazians are appointed to administrative posts. Often, Georgians may be promoted if they say they are of Abkhazian ethnicity, not citizenship.

They also have problems crossing the border to Georgia-controlled territory. These are issued raised regularly at the Geneva talks.

In 2004 when Khajimba lost election with Baghabsh, Russian President Vladimir Putin, who supported Khajimba’s candidacy, was so angry that he closed the borders with the region and established a blockade, but later he reluctantly recognized Baghabsh’ victory and opened the borders.

The Georgian side says that at this stage it is important that these people don’t have problems.

Keti Tsikhelashvili, Deputy Minister of Reconciliation and Civil Equality, says that Georgia will inform participants of Geneva talks in detail about this issue.

“The main thing is that the basic rights of these people aren’t restricted, like the right to live there, the freedom of movement, education,” she told DF Watch.

Tsikhelashvili says Georgia doesn’t recognize this election, and neither does the international community.

Next round of Geneva talks is planned on June 17.