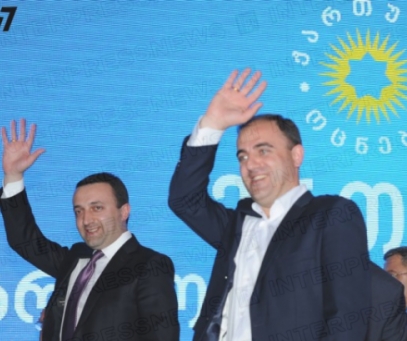 Prime Minister Irakli Gharibashvili congratulated candidate for Tbilisi mayor Davit Narmania on his victory, while representatives of the National Movement are convinced there will be a second round, at least in the capital.

According to the last exit poll results from the company GFK, which were ordered by Rustavi 2 TV, Davit Narmania from the Georgian Dream coalition received 45.9 percent of the votes in Tbilisi, Nika Melia of UNM got 27.6 percent.

Dimitry Lortkipanidze from Nino Burjanadze United Opposition got 10.1 percent, while Irma Inashvili from the Alliance of Patriots got 6.3 percent and Kakha Kukava from Free Georgia Party 2.2 percent.

This exit poll had a margin of error of 3 percent and according to the poll the voter turnout in the capital was 35 percent.

According to GFK, Georgian Dream is winning in the election for Tbilisi City Council and received 47.5 percent of votes, while UNM got 26.1 percent, followed by Nino Burjanadze United Opposition 8.1 percent and 6.1 percent to Georgia’s Alliance of Patriots.

According to the Central Election Commission (CEC), 1,485,372 people voted in the election as of 20:00 on Sunday. This is 43.31 percent of the number of registered voters.

The lowest voter turnout was noted in the capital with 37.3 percent, while Racha-Lechkhumi had the highest turnout with 61.2 percent.

Georgian Dream’s Davit Narmania addressed supporter at the coalition’s office after the results of the exit polls were announced.

“We survived lot together, but we never doubted our victory,” he said, adding that Georgia proved to the world that it is possible to conduct free and democratic election in the country.

Prime Minister Irakli Gharibashvili congratulated Narmania on his victory in the election. He also congratulated people with conducting an open and democratic election.

“According to the results of 20:00, our candidate Davit Narmania won the election in Tbilisi in the first round. Now it is necessary to wait for the final results.”

“The Georgian people clearly showed Ivanishvili and the ruling coalition that they don’t like the way the country is developing,” he said, adding that people don’t like policy built on lies.

He said there will most likely be a second round in Tbilisi, Rustvi, Batumi, Telavi, Gori and maybe in Kutaisi as well.

Davit Bakradze, former Speaker of Parliament from UNM, said the government now tries to imitate celebration as if they have reason for this.

“Judging by the exit polls, almost in every large city there will be a second round, including in Tbilisi. What does the government have to celebrate?”

Nino Giorgobiani, spokesperson for the Interior Ministry, said at a briefing at the end of the day that the election was conducted in a democratic and peaceful environment.

She said that there were several cases of election violations, which police reacted to. Investigations are launched for all of these cases.