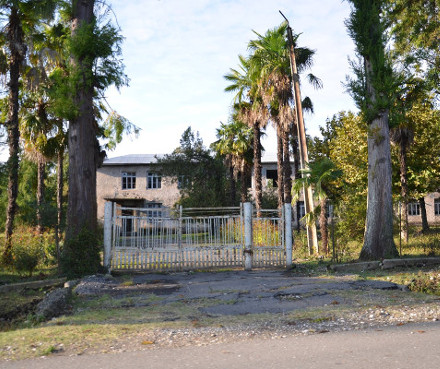 The Georgian school in the village Tagiloni, 9 km from Gali, which was closed recently. (DFWatch.)

GALI, DFWatch–Breakaway authorities in Abkhazia have closed a public school in the region’s southern district which has a predominantly ethnic Georgian population.

De facto authorities told school principals in Gali on Wednesday that the school in Tagiloni, a the village near Gali, must be closed due to the small number of students. The principals were asked to distribute students between other schools in the vicinity.

They were also asked to employ the teachers at the now closed school.

“There are 29 children attending the school, we do not have 4th and 7th grade classes at all. We were hoping that [the authorities] would allow [us] to conclude the first semester, but that did not happen. Probably the students will be accepted by nearby schools from Monday on,” one of the teachers at the Tagiloni school told DFWatch.

The school closure comes as for the second year now, Russian is the mandatory language of instruction in first to sixth grade at Gali district’s Georgian elementary schools. Due to lack of proper knowledge of Russian, many families opt to send their children to schools in Zugdidi or elsewhere across Enguri river, to territories controlled by Georgian authorities.

The decision to switch from Georgian to Russian as the language used for teaching led to a drop in the numbers of pupils at all of Gali’s formerly Georgian schools, which has become an apparent excuse for Sokhumi authorities to close the school.

Although Sokhumi authorities ascribe the school’s closure to the scarcity of students, the locals claim the real reason is related to the fact that de facto government was unable to find enough Russian-speaking teachers for Georgian schools.

The teachers at Gali’s formerly Georgian schools fear other schools will face the same fate, if the trend continues.

“The Abkhaz side don’t have enough Russian-speaking teachers to staff Gali schools, and that is why teachers have been undergoing retraining courses for the second year, but evidently this was not enough. There is an assumption that if [Sokhumi] authorities can’t fully implement their plans of Russification, they’ll gradually phase out all Georgian schools here,” one of the local teachers told DFWatch.

After the closure of Tagiloni school, altogether 30 public schools were left in Gali district, where 4,315 pupils are currently enrolled. Out of these, 10 schools offer teaching partly in Georgian.

Gali is the only district in breakaway Abkhazia where ethnic Georgians still constitute a majority, over 98 percent, of population. Although Georgians constitute majority of population in several other districts, including Sokhumi, Ochamchire, Gulripshi and Gagra, prior to 1992-93 War in Abkhazia, they were almost totally ethnically cleansed during and immediately after the war. Only Gali district was spared from the ethnic purges but still has been undergone strict political, economic and cultural pressure by the separatist authorities.