Abkhazia field meetings to be resumed after near four-year break

Abkhazia field meetings to be resumed after near four-year break 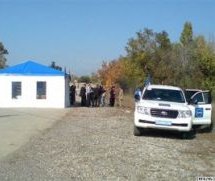 TBILISI, DFWatch–The parties have agreed to resume talks aimed at solving problems in the border areas near the Georgian breakaway region Abkhazia.

Agreement to resume the talks, called Incident Prevention and Response Mechanism (IPRM), was reached during preparations for a meeting in Geneva between the warring parties of the 2008 Georgia war.

IPRM meetings began some months after that war, and were held near the border with both Abkhazia and South Ossetia, but the Abkhazia-related meetings were canceled in 2012 after a dispute following a controversial comment by the head of the European Union Monitoring Mission in Georgia (EUMM), which hosts the IPRM meetings along with the Organization for Security and Cooperation in Europe (OSCE).

OSCE informs that the parties appreciated the intense work going on at IPRMs for South Ossetia, held at Ergneti.

“The participants also welcomed several recent positive and encouraging developments, in particular the simultaneous release of detainees on March 10 and the resumption of the work of the ICRC tripartite mechanism on missing persons in Ergneti on February 5,” OSCE writes.

About a week ago, the co-hosts of the Geneva talks met with representatives of the de facto government of Abkhazia in Sukhumi to discuss topics for the new round of talks. During the meeting they discussed the possibility of resuming the IPRM meetings.

Vyacheslav Chirikba, de facto Foreign Minister of Abkhazia, expressed hope that IPRM meetings will be resumed and said it would be an important venue for exchanging information on security issues, as well as increasing the trust between the ‘neighboring states.’