Abkhaz leader plans to close all but one checkpoint

Abkhaz leader plans to close all but one checkpoint 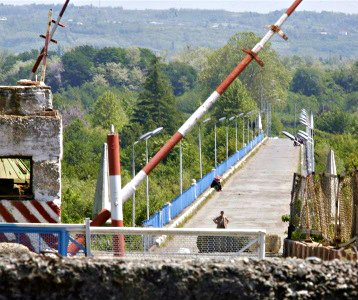 Only the main checkpoint on the Enguri river will be operational. (Interpressnews.)

TBILISI, DFWatch–The newly elected de facto president of the breakaway region Abkhazia wants to close five out of a total of six ’official’ checkpoints that divide Abkhazia from Georgia proper.

According to Russian news agency Ria Novosti, Abkhazia’s new president, Raul Khajimba, said during a meeting of his Forum for the National Unity of Abkhazia (FNUA) that the ‘border with Georgia’ should be consolidated, which means closing all checkpoint but one along Enguri river, which divides Abkhazia from the rest of Georgia.

Raul Khajimba is a hardliner politician who was elected as president of Abkhazia in August in snap polls after the deposition – not without the help of  the Kremlin – of his more moderate predecessor, Alexandr Ankvab. Khajimba is a cadre KGB officer and graduated from the KGB school in Minsk during Soviet times.

Khajimba ran for Abkhaz president in several elections but was soundly beaten, first by Sergey Baghapsh two times – in 2004 and 2009 – and then by Alexander Ankvab in 2011 after the death of Baghapsh.

While in opposition, Khajimba was notorious for his hard line toward the Georgian state and the Georgian ethnic minority in breakaway Abkhazia. The closure of the ‘border’ with Georgia proper was a long standing idea of Khajimba and members of his political coalition, FNUA.

The ethnic Georgian population in Abkhazia is quite dependant on its ties with Georgia proper for trade, educational and social relations, so resticting the passage over Enguri would impact them significantly. However, many Georgians living on both sides of Enguri use numerous ‘unofficial’ passages to enter and leave the Gali district in southern Abkhazia. The Gali district is populated almost entirely by ethnic Georgians and borders on the Zugdidi disctrict of Georgia proper.

The de facto border between Abkhazia and Georgia proper is controlled by Russian border troops. Russia recognized Abkhazia as an independent state in 2008 in the wake of the August War. The US and EU and many international organizations consider the Russian presence in Abkhazia and South Ossetia, another Georgian breakaway territory, as occupation, in light of the establishment of Russian military bases in these separatist enclaves.