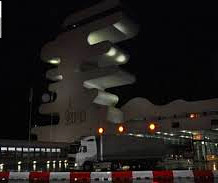 TBILISI, DFWatch–In the ten days that have passed since the November 13 terrorist attacks in Paris, law enforcers in Georgia have prevented 479 foreigners from entering the country.

One Georgian citizen and 31 foreign citizens have been detained for illegally crossing the border between November 14. and 24.

Stricter security measures are enforced at all border crossings, according to the Interior Ministry.

A statement issued by the ministry on Tuesday says that the patrol police is carrying out thorough checks on people and questioning them to find their ‘true motivation’ for visiting Georgia.

“Particular attention is paid to checking travel documents. The transit flow of passengers is duly inspected in order not to allow foreigners with high risk to make it to other countries illegally through Georgia,” the statement reads.

The Ministry states that law enforcers are working in a special regime as personnel from the patrol police have been added to reinforce staff at the border.