24 000 families to be compensated for war losses

24 000 families to be compensated for war losses 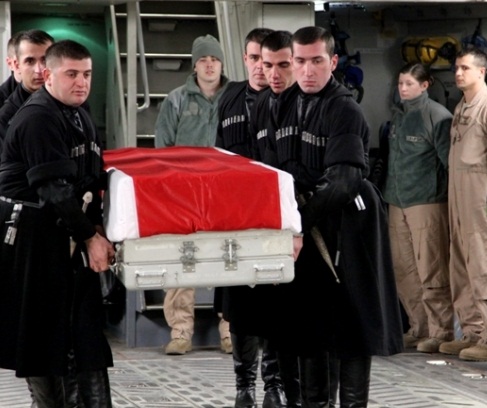 Families who have lost a member in the military will get compensation. Photo shows the body of Sergeant Giorgi Kikadze being brought home from Afghanistan earlier this year. (Ministry of Defense.)

TBILISI, DFWatch–About 24 000 families who lost a member while doing military service will get increased compensation according to a new initiative, which will be presented to parliament on Friday.

The proposed bill will amend the law on the status of a military servant and the law on state compensation and state academic scholarship.

Families who lost a member while taking part in international or other peacekeeping missions, or fighting for Georgia’s territorial integrity and independence, will get a one-time compensation in the amount of USD 60 000. Also to be compensated is a family of a person who was injuried during such service.

Families who lost a member while participating in an operation in Afghanistan in the past will also get this one-time compensation.

Also, pensions will be increased for families with a member who fought for Georgia’s territorial integrity since the 1990s. This will be USD 300 monthly from 2014 and will increase to USD 600 from 2015. Compensations are also foreseen for those whose family members are lost. The monthly pension will increase for about 24 000 families.

Giga Bukia, one of the authors, noted today in parliament that about USD 14.5 million will be allocated for this from government’s reserve fund.