More Georgian students to get scholarships for UK

More Georgian students to get scholarships for UK 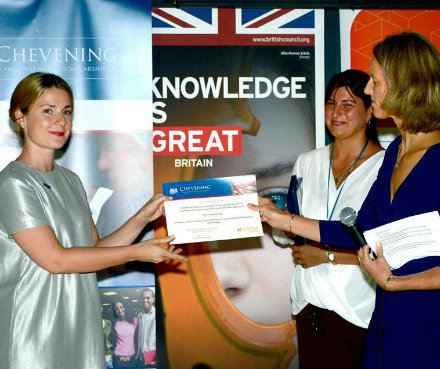 Six Georgian students will be able to go to the UK to complete their Master’s degrees this year with Chevening scholarships. (Photo published by the UK embassy on Facebook.)

TBILISI, DFWatch–In 2014-2014, six Georgian students will continue their Masters degrees at British universities with support from the Chevening program.

The scholarships are mainly given for studies within economy and politics.

The UK government plans to triple the financing for such scholarships, British ambassador to Georgia Alexandra Hall Hall said at a recent event at the UK embassy in Tbilisi to mark the departure of this year’s Georgian students.

Nino Vardosanidze, one of those awarded a scholarship, told DF Watch that she is going to London to take her MA in political science.

“This is really prestigious for me because every year only a few students are selected and this year I was lucky to be one of them,” she said. “I really hope and think that it will be good for my future activities.”

The Chevening scholarship is a global project financed by the UK Foreign Office and partner organizations.

The students come from 118 countries around the globe and there are about 42,000 Chevening graduates in the world.