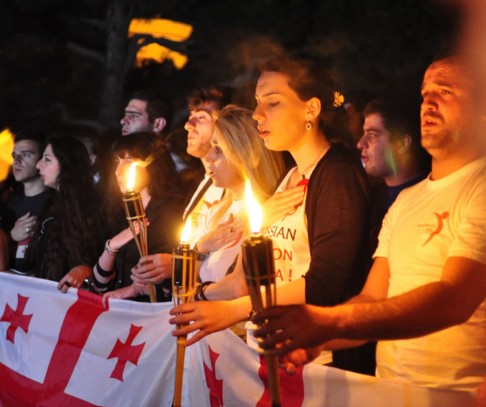 Torch lighting event on Wednesday to commemorate the 2008 war. (Interpressnews.)

TBILISI, DFWatch–Every year after the Russia-Georgia war in 2008 there have been planned different events for the five days the war lasted to pay tribute to the victims.

Events were planned today in Gori, a town close to where the war took place. In the morning there was a special prayer service at Gori cathedral, and later government officials came to the Memorial of Heroes bringing flowers and holding speeches about the events in the war.

There is also organized an exhibition in Gori of photos and videos shot during the war.

On the central square there will be held ceremony this evening where 800 soldiers will take their oath.

Members of parliament, government officials, and President Saakashvili arrived at Mukhatgverdi cemetery to pay tribute to the dead soldiers who are buried there.