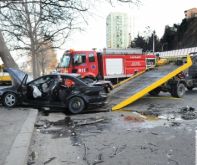 TBILISI, DFWatch–180 people died in traffic accidents in Georgia in the first half of 2014, according to new figures from the Interior Ministry.

The figures published Tuesday show that an upward turn in road accidents has stopped, but numbers remain high compared to two or three years ago.

There were 69 motorcycle accidents in the first half 2014. 76 people survived such accidents with injuries, while two died.