16 rescued from sea during the storm: MIA

16 rescued from sea during the storm: MIA 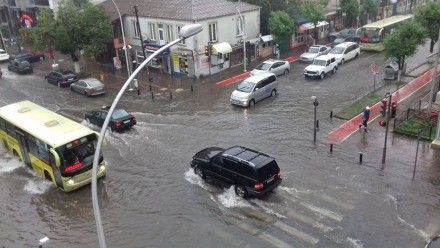 TBILISI, DFWatch–16 people, among them several foreign tourists, have been rescued in Adjara after a strong storm hit the Black Sea coast of Georgia on Sunday, according to a statement by the Ministry of Internal Affairs.

The rain lasted several hours, flooding the streets in Batumi and nearby settlements. Ground floors and basements of houses were also inundated.

The large number of holidaymakers who rushed to escape the bad weather on the Black Sea coast and headed toward Tbilisi caused numerous traffic jams along the main road connecting the eastern and western parts of the country. There was an especially large gridlock in Zestaponi.