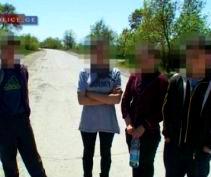 Five of the detainees were minors from the village Korbouli. (Police.ge.)

TBILISI, DFWatch–Twelve Georgian citizens were Tuesday released after having been detained by Russian soldiers for crossing the border of South Ossetia.

May 1 to 4, Russian soldiers detained 22 people living in villages near to the breakaway region. According to the Interior Ministry, 17 of them have been released by now, including five minors.

According to the ministry, negotiations were held with the de facto authorities in the Thskhinvali region about releasing 12 Georgian citizens.

Five minors were released May 2 after negotiations. Five of them were moved to a pre-trial isolator in Tskhinvali after their detention.

Earlier, May 1, the ministry brought news of the release of a man born in 1938 who was detained by Russian soldiers April 22 in the village Kirbali.

These kinds of incidents are not unusual in the villages close to the conflict zone. People frequently get detained for crossing the border while out gathering plants or doing other agricultural chores. The twelve people who were released are from the villages Korbouli, Khvani and Gorisa.