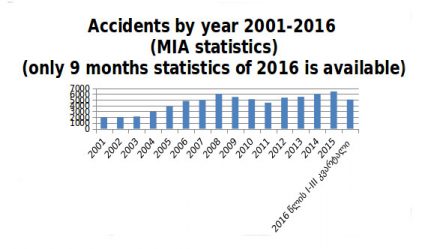 TBILISI, DFWatch–An 11 year old girl was killed in a car crash on the outskirts of Tbilisi on Tuesday.

The tragic accident occurred in the morning hours Tuesday on Aghmashenebeli Lane on the northern outskirts of the city.

The car, presumably a BMW, first crashed into another car and then veered into the bus stop, where it hit a woman and her daughter who were waiting for the bus, eyewitnesses said.

One of the witnesses said the victims live nearby and were probably on the way to school.

The child (11) was killed on the spot, while her mother was rushed to hospital with multiple injuries. Her condition is serious, but stable, according to doctors.

Both drivers were detained and taken to a lab for alcohol tests.

Since 2011, Georgia has witnessed a steady increase in car accidents. According to figures from the Ministry of Internal Affairs, 602 people were killed in traffic accidents in 2015 and 409 were killed in the period from January through September of 2016.