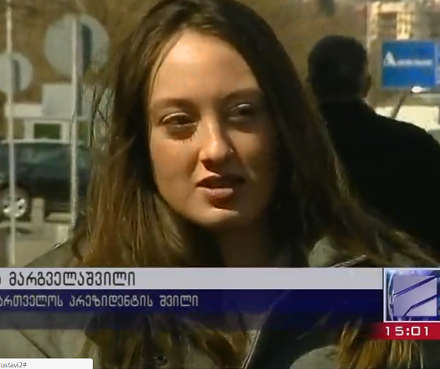 Among the protestere was Ana Margvelashvili, daughter of the president of Georgia. (Rustavi 2.)

TBILISI, DFWatch–The daughter of the president of Georgia claims police framed her friend because he has been involved in political work for the president.

It used to be an oft-heard story during the Saakashvili presidency: regime critics who are set up by police planting drugs in their pocket. But now activists raise the alarm and say police are again placing drugs on people connected to the opposition in order to get them hooked for a crime.

A crowd of protesters gathered in front of the Ministry of Internal Affairs building in Tbilisi on Wednesday to protest the resurgent practice.

Incredibly, the daughter the serving head of state was among the protesters. Ana Margvelashvili, daughter of President Giorgi Margvelashvili, claims that when her friend was detained recently, it was part of what the activists call ‘the repressive drug policies’ of the law enforcement agencies.

Ana’s friend, Mikheil Tatarashvili, was detained on March 17 for possessing Subutex, a brand name of buprenorphine; a synthetic opioid used to treat drug addiction which is illegal in Georgia.

Now the president’s daughter insists that her friend was detained because of his links to activities of the president, who is at odds with the Georgian Dream government.

Eliso Kiladze, an outspoken journalist, also attended the rally. Her son Davit Kharshiladze (28) was detained on March 16 for possession of buprenorphine. Kiladze is editor of Kronika Plus, a UNM linked magazine strongly critical of the Georgian Dream government.

The same day, on March 16, the police detained also the son of Khatia Dekanoidze, former chief of Ukraine’s police. She left her position in November last year and returned to Georgia, joining the National Movement which was headed by ex-President Mikheil Saakashvili.

She regarded arrest of her 18 year old son as politically motivated as well.