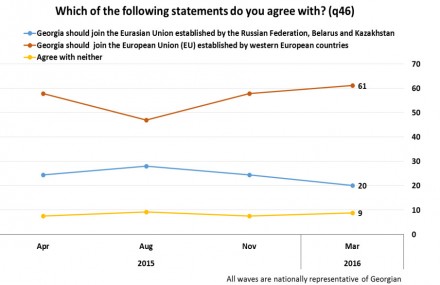 TBILISI, DFWatch–The proportion of Georgians who think their country should join the Russian-led Eurasian Union has fallen by about ten percent since August, 2015.

20 percent of Georgians now agree that they should join the Eurasian Union, according to a new opinion poll published Monday by the National Democratic Institute (NDI).

In a separate question in the new survey, people were asked if they approved or disapproved of the Georgian government’s stated goal of joining the EU; 77 percent approved, while 14 percent disapproved.

84 percent of the people questioned said they support the introduction of visa-free travel to Schengen countries. Eight percent said they do not support this, while seven percent answered that they don’t know.

68 percent approve the Georgian government’s stated goal of joining NATO, 19 percent disapprove, and the rest do not know.