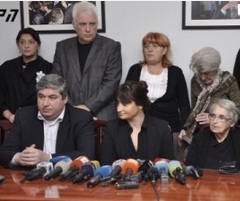 Saakashvili said in a recent interview on Rustavi 2 that during the investigation of Zhvania’s death, his widow was only interested in money which she thought her husband owned.

Zhvania was found dead in February 2005 together with one of the members of his party. According to the official version, they both died of being poisoned by carbon monoxide from a faulty gas heater, but people still believe that this version is a lie and that the PM was murdered.

Many think Zhvania was killed and that the former government was putting a lid on it. People were also suspicious because then Interior Minister Vano Merabishvili said only a few hours after the bodies were discovered, and before an autopsy had been carried out, that the PM died of gas poisoning.

When members of the current government were in opposition, they used to say that Zhvania’s death must be investigated properly from the beginning. An investigation was relaunched after the change of government, but no details have been reported so far. Government officials have only said that the investigation is still in progress.

One week ago, someone posted a video on Youtube which contained photos of the dead bodies of Zhvania and his friend, and showed that they had injuries.

The former Chief Prosecutor said that these photos were part of the evidence in the case. The government didn’t deny this, but it is still unknown how the photos ended up on the Internet.

But posting them on Youtube led to two persons being detained – head of shift of Zhvania’s bodyguards, who was on duty on the day when Zhvania died, and a person who was one of those who conducted an autopsy on the body. Both are charged with negligence.

A few days later, the Prosecutor’s Office stated that they were summoning ex-President Mikheil Saakashvili for questioning. He is currently not in Georgia and it is already known that he doesn’t plan to come.

In an interview with the television channel Rustavi 2, he said that the family of Zurab Zhvania were mostly interested in money and used to talk to him about money.

He said that the wife of Zurab Zhvania came to him and asked to ‘withdraw the money.’ He said that Nino Zhvania was only interested in money and he tried to assure her that politicians do not have money and Zhvania also couldn’t have money.

In Georgian society, it is regarded as shameful to ask for money when a person has died, because it is perceived as disgraceful toward the dead person. That’s why some people thought Saakashvili wanted to discredit the Zhvania family by his statements, and many people, including his supporters, criticized him for it.

Ghia Nodia, political commentator, who openly supports his party, wrote on Facebook that it doesn’t matter whether it is true or not, but it is unacceptable to publicly talk about such confidential conversation either morally or politically.

Nino Kadagidze-Zhvania, the former PM’s widow, said that she spoke about money with Saakashvili only once and only because she proposed that the investigation should also pursue the theory that it was a burglary. She said Koba Kharshiladze, head of shift of Zhvania’s personal guards, took the key to the safe from Zhvania’s pocked after his death and took everything from this safe so that no-one knows what was lost from the safe. She said her personal items, which were kept in the safe, were also lost.

Kadagidze also said that Saakashvili told him to ask him about anything – except the investigation.

She thinks Saakashvili’s statement has only one goal: to draw attention away from the investigation to some scandal issues, which will interrupt the investigation. She says the case is politicized.

Goga Zhvania, brother of the deceased PM and a member of parliament, said that he is sure the investigation will lead to real results. He said the investigation is progressing fast and soon international experts will arrive to get involved.

Nino Kadagidze says that if it becomes necessary, she will agree to conduct a new autopsy on the body of her dead husband.

“This is not a simple process. There have been several attempts by me and Goga since 2005 to demand an independent investigation,” she said. “Now it seems we have agreement to conduct a normal independent expertize.”

During the press conference, Kadagidze was asked about the reasons why evidence in the case wasn’t published, as there were claims that they contained delicate facts.

There are claims that Zurab Zhvania and his friend were discovered dead during intimate relations in the room and that the government then didn’t wish to talk about it.

At the end of Eduard Shevardnadze’s government, there were different reports about leaders of the opposition, including Saakashvili and Zhvania. Shevardnadze used slander to discredit the opposition, because most people in Georgia are Orthodox Christians and such a rumor would therefore be very damaging. However, Shevardnadze’s policy of slandering opponents didn’t have any results. This version was also considered among people after Zhvania died, but no-one talks about it openly until today.

“This delicate part is why we are being black-mailed all the time and traumatized, you know,” Kadagidze responded briefly.