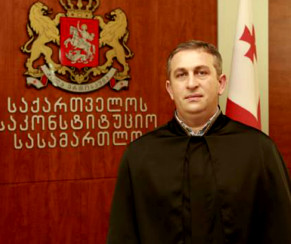 He will replace Giorgi Papuashvili.

The ballot was secret, but it is likely that the following judges supported Tavadze: Merab Turava, Lali Papiashvili, Teimuraz Tughushi and Tamaz Tsabutashvili, in addition to Tavadze himself.

Those who might not have supported him, would be the judges who proposed Irina Imerlishvili as the second candidate.

Imerlishvili has been secretary of the National Security Council. She was appointed judge on October 2 from the presidential quota. Imerlishvili, Giorgi Kverenchkhiladze and Maia Kopaleishvili vouched for her as a candidate, and she likely got these three votes during the ballot, including her own vote.

Tavadze comes to the post after having been deputy to Papuashvili, and was acting chief judge after the end of the latter’s term. Tavadze was deputy justice minister in 2008-2010, at a time when the National Movement was in government; but despite this, he is now suspected by some of being loyal to the governing Georgian Dream party.

Tavadze was one of the five judges who wrote a letter to Papuashvili on July 29 protesting against the way the court was prioritizing certain lawsuits, including the ownership dispute over the opposition TV channel Rustavi 2.

Shalva Shavgulidze, a member of the Free Democrats, believes that the new head of the Constitutional Court is controlled by the government.

“Zaza Tavadze is a judge who facilitated the postponement of hearings when there was no legitimate grounds for that, and he didn’t show up for scheduled hearings,” he said, adding that the judge ‘artificially delayed’ the so-called cables case about former Defense Ministry officials who were arrested for embezzlement in 2014, when Irakli Alasania, leader of the Free Democrats, was defense minister.

Normally, the head of the Constitutional Court is elected for a five year term, but Tavadze will have the post for four years since his term as a judge will expire in less than four years.