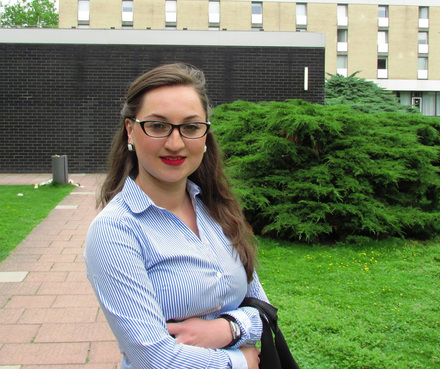 TBILISI, DFWatch–In Georgia, a group of young students have created their own parliament. It has 100 MPs and prepares real draft laws which are sent to the real parliament.

A few weeks ago, this youth parliament held its 2014 opening session in the parliament building in Kutaisi, Georgia’s second largest city. 100 elected MPs met with the heads of several committees and spoke about future plans. There are ten committees in the youth parliament. MPs are elected for a year at a time.

DFWatch spoke with Teona Lavrelashvili, the founder of Georgian Youth Parliament, to find out more about its activities.

When was the youth parliament created and whose initiative was it?

Georgian Youth Parliament, presented as one of the powerful youth platform, was formed in 2011, when I was still a 3rd course student at Tbilisi State University. From the very beginning, I tried to increase student participation, therefore my civic activities starting from the early student period, including experience in self-government and international youth organizations stipulated creation of the Youth Parliament, however by this step, I wanted to create the real platform for youth for real participation and I believe we did it, but of course we are in a dynamic process and we still have much to do.

What is the youth parliament? Is it registered as an organization, and how many members are there?

Registered as an NGO, the Youth Parliament is a union of motivated and inspired young people who believe in their potential and want to make a difference not only with words, but with deeds, therefore they are challenged to meet the expectations of society and young people. Let me mention that the idea of a youth parliament has developed quite differently than what we had in 2011. Namely, in the beginning we started by role play of parliament and covered all regions of the country with 3,500 young people, and already in 2012 we developed a new concept, which gives each deputy a one year mandate to act as a representative of young people, work on legislative proposals, meet the youth and people to identify the problems and advocate progressive ideas.

In total, Youth Parliament has 8,000 alumni and I am proud of each of the young people, who participated in our projects. Moreover, they are continuously trying to develop their peers. This is a very important value for me: to assist others in achieving success, because it will be the success of our country indeed.

Did there exist a youth parliament in Georgia before now, do you know anything about it?

Yes, Georgian Youth Parliament existed in the late 1990, and it was initiated by Zurab Zhvania. However, due to the turbulent social-political environment, or possibly for other reasons, it was soon dissolved. I want to emphasize that the early youth parliament was completely different from what we have now, as the previous one was based on role playing methodology, while this youth parliament is based on real and practical mechanisms.

How are MPs for the youth parliament selected?

Each year, 100 young deputies are selected by competent jury members, however in a very short run period, we also plan to transform the youth parliament into a bicameral structure, meaning that in the lower chamber young parliamentarians from schools will join us. As the interest towards our platform is rising rapidly, we do not want anyone to be excluded from this process, therefore we will give schoolchildren the opportunity to experience the youth parliament. After this project, 150 young people will be selected every year.

How does the youth parliament function, where will you hold future meetings? Are there any committees or groups which work on different specific issues?

Youth Parliament works with almost the same methodology as the real one. We have committees, where young parliamentarians discuss draft laws, which are afterward proposed to the Georgian parliament, also debate on the problematic problems in order to advocate effectively and plan their activities such as public debates, discussions and social events. A plenary session takes place every month, while committee sessions have to be held at least once a week. Due to our numbers, we need big halls for gathering which have been and will be universities, the Georgian parliament, Public Library and other places.

What were the main messages during the opening of the youth parliament?

The main message from me to my colleagues was to put our words into action. Georgia, as a small country with low political and diplomatic experience, lacks not only effective participation by citizens in political processes, but also politicians lack a culture of political performance, and we have to help them to fulfill their mandate in accordance with the people’s will. Therefore, political ideological differences are not so much important rather than progressive ideas, to which we should unite our forces rather than disperse them. Everyone can and might have different political views, but we should not forget the state interests and should not waste our time in manipulation of ideas but act for society and make positive changes in Georgia. We believe and strive for widening the scope of decision-making, where people should have effective access to the process. The youth parliament will therefore actively work with youth from regions and rural areas, and we will also include our diaspora in Georgian activities, as they are very experienced and motivated to share their knowledge. Currently, I am in Europe and have already planned meetings in Germany, Kalsrue and Brussels, and will also have meetings with our diaspora in the US next month.
Will you be involved in the working process of the Georgian parliament and how?

The Georgian Youth Parliament has direct communication with the Georgian Parliament, we are somehow already “legitimized” by them and it is very good for youth, that it gives our members a real opportunity to propose laws or make relevant amendments. We are often invited to hearing processes, and our committees are maintaining close relations with the offices of parliament to be promptly informed about changes in Georgian legislation.

Are you already implementing any proposals?

Yes, we have several big projects, one of them is together with the Civil Service Development Agency. We are implementing assistant educational and business programs for youth from rural areas. Also we have close relations with the diplomatic corps of Georgia, also with UN agencies, the International Chamber of Commerce, the EU delegation, the US Ambassador, the US Congress and others, and therefore I am very happy to have the support of such important organizations and persons.

What are your main goals in the future?

We have realized that among the many challenges Georgia is facing, one of the biggest and determining one is youth, which is not only the future but also the present of the country. Therefore we will continue dedicating our motivation to give youth a real platform for self-expression and an arena to put their words into actions. I think that the 2014 convocation of the youth parliament will be very productive, as the selected individuals are simply amazing youngsters distinguished by their inspiration and enthusiasm, who will become examples for active and dedicated citizens, who will undoubtedly change Georgia for the better in a short term and long term perspective.