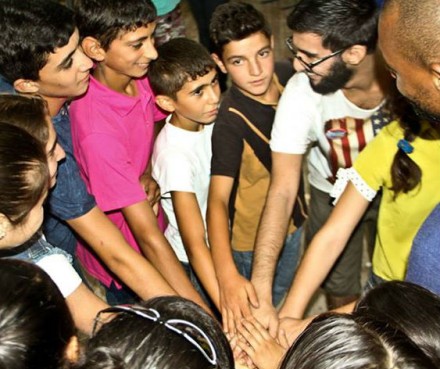 Tbilisi, DFWatch – Ethnic Armenian, Azerbaijani, and Georgian activists from Marneuli district take part in preparations for the One Caucasus Festival to be held on 27–29 August in the village of Tserakvi.

Days before the official opening of the One Caucasus Festival, the inhabitants of Marneuli district of Kvemo Kartli region have a chance to take part in family-oriented educational activities and workshops.

Marneuli district is one of the most ethnically diverse districts of Georgia boasting strong Armenian, Azerbaijani, Georgian, and Greek communities. Its location at the border with Armenia and Azerbaijan makes it a natural choice for a variety of project with a pan–South Caucasian scope.

Local youth could already take part in a variety of inclusive workshops, including ‘StoryPuri’ where young activists collect and revitalise the recipes and stories of the four of ethnicities of the Marneuli region and ‘Caucasus News + Cartoon-making workshop’ where ethnically mixed groups of children try their forces as reporters, journalists, animators, cameraman, and sound-engineers.

The 35 young activists who took part in the latter workshop will soon begin to publish news about the festival in Armenian, Azerbaijani, and Georgian.

The festival will open in the village of Tserakvi on 27 August and will last for three days. The line-up includes artists from Armenia, Azerbaijan, Georgia, Poland, and Senegal. The festival area will also include thematic workshop areas about participatory budgets, sound experiments, human rights, and cinema spaces, among others.

The festival is co-funded by Marneuli municipality and the Ministry of Culture and National Heritage of the Republic of Poland.