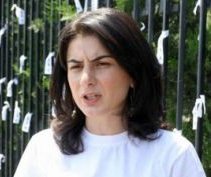 Tamar Khidasheli and Georgian Young Lawyer's Association won a suit against Georgia's parliament, arguing that a section of the law gave prosecutors the right to do secret wiretapping without court approval. The Constitutional Court agreed and found the law unconstitutional. (Photo: Interpressnews.)

TBILISI, DFWatch – Georgia’s Constitutional Court has decided that parliament did not have the right to give prosecutors powers to conduct secret wiretappings.

Tamar Khidasheli and Georgian Young Lawyers Association filed a lawsuit at the Constitutional Court regarding the law of Georgia on Operational Investigative Activities, which gave the police extended powers during investigation.

The lawmakers behind the powers did not agree, and argue that there is already enough safeguards for the privacy of the individual in current legislation, which excludes the possibility of secret interception and surveillance without judicial control.

But after reviewing the case, the Constitutional Court ruled that the law ‘interfered with the right to privacy of individuals enshrined in the first paragraph of article 20 of the Constitution of Georgia.’

The Court focused on the importance of letting the courts conduct oversight over secret wiretapping.