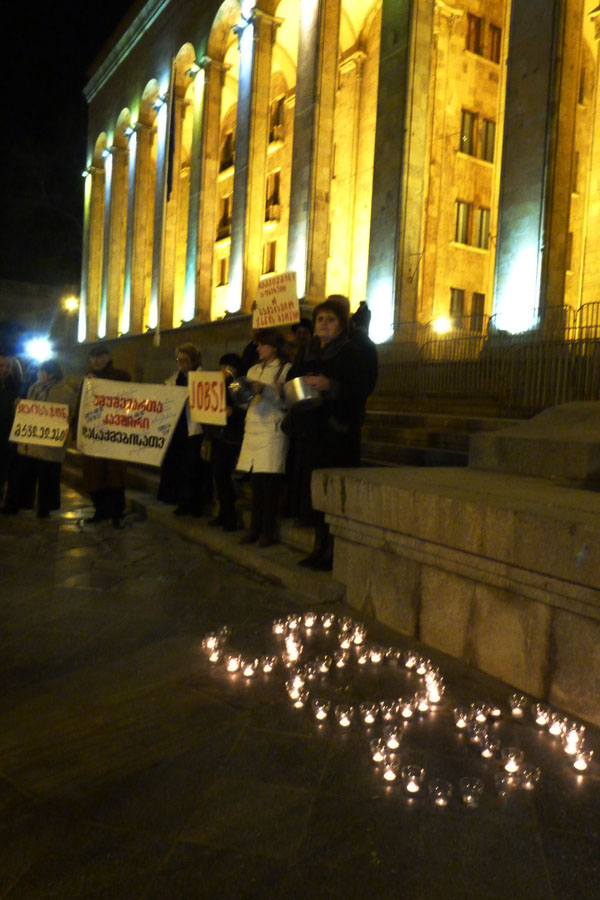 Refugees have organized to get the attention of authorities. Resettlement plans are just not working, and refugees are coming back to Tbilisi, after failing to settle in in the village where they were forced to move. (Photo: Mari Nikuradze.)

TBILISI, DFWatch – Georgia’s president Mikheil Saakashvili was not only confronted with objections to his rule inside the parliament building Tuesday. On the outside, people had gathered, banging pots with spoons in protest against his eight years leading the former Soviet republic.

Among the slogans were “Bring the soldiers back from Afghanistan”, “Punish the murderers” and “Jobs!”.

People had showed up both those from the Abkhazian war of the 1990s and the war against Russia in 2008. Both had the same demand: to meet the president personally and ask for help, as they had failed to arrange a visit, or even establish contact with the Refugee Ministry, after numerous attempts.

Lately refugees are warned that they must resettle from Tbilisi to villages in the regions of Georgia.

“They throw us away. Just like this. Imagine we live here for almost nineteen years. And suddenly we have to be somewhere in a village, without a job, without anything. What should we do? All of us?” one of the protesters asks.

Nani Melanashvili tells the story of her mother, who lived in the village Nikozi, which was affected during the Russian-Georgian war in 2008. Her house was damaged, so the government gave her shelter in the nearest kindergarten.

She says that her mother wasn’t able to live under the conditions they had in the kindergarten and she had to go back to uncontrolled territory to live. She has 54 lari income for being the refugee.

“Not because she wasn’t afraid living there, but because she hopes that if Ossetians invade, that since she’s of Ossetian origins maybe she will survive,” Nani Melanashvili says, adding that she and her family are still living in the shelter.

Nani Melanashvili says her brother was fighting in the second battalion of the second brigade at that time.

“He is in a serious condition in a Wheelchair. He has 70 lari of income. The government didn’t pay medical treatment fees.”

Nani hopes to deliver a letter personally to the Georgian president. She doesn’t yet know how, but the letter explains in detail her how her life is.

The question several refugees from the same village have is what the government is going to do with the population living there.

“People risked and went living there due to not having any other choice. We didn’t even have irrigation water for four years. No income. Like beggars we live on one bag of flour and two cubic meters of firewood.”

The activists complain that no-one from the government are paying proper attention to them.

“I want to ask Mr President: why we were called Shevardnadze refugees and Saakashvili’s refugees and why the refugees are resettled in a selective way?” Ia (60) tells DF Watch. She has the same problem, and has been living in Tbilisi for nineteen years, but is now to be resettled to some village.

“Today I’m resettled from the house I built with my own hands. They came to my house demanding that I leave the house together with my two grandchildren.”

She also tried to inform the ministry about her problem, but without success.

“Resettling us after 19 years will be equal to becoming a refugee again,” Ia says.

Her sons have jobs here; not very highly paid, but still enough income to provide for the family.

“I’m ready for everything. I will tear my ID into pieces, give up the Georgian citizenship and go to my beloved Abkhazia.”

Ia managed to deliver a letter personally to the Georgian president at different meetings in Tbilisi districts.

“Once he was opening some stadium near my district, neighbors told me. I arrived there by taxi in my home clothes. Yelled and screamed to get closer to him. When the president asked the guard to let me get to him, I gave the letter to him,” she says, adding that there was no response from the government, nor from the president.

She managed the same several times, and even delivered a letter to the first lady, but there was no response.

The government started resettling refugees to certain villages and officially registering those areas to these families. Years after the conflict, it looks like the government fulfills its responsibility to provide refugee families with permanent living quarters; however these villages turn out to be impossible to live in for the refugees, so they are coming back to Tbilisi.

Newly resettled families are holding a permanent protests, demanding to meet with the refugee minister Koba Subeliani, complaining that there are no living conditions there.

Some families just returned back to Tbilisi and rented flats, but many of them don’t have enough money, so they stayed in the villages.

“When the president so often says that Georgia’s territorial integrity should be restored and the conflicts resolved, he should seriously invest in the refugees, who should be involved in this process,” says Lela Guledani, chair of the Refugee Civil Society Coalition, adding that they will continue protesting to try to get the government’s attention.

Apart from the Public Movement of Refugees, the Association of Unemployed for Employment and the Free Associations Union also took part in the protest.

http://mra.gov.ge/main/ENG#section/50 – ministry’s official statistics of refugees in the Georgian regions.