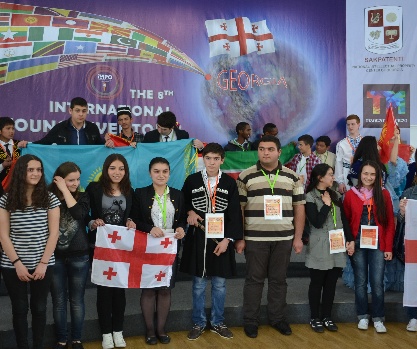 This was the eighth Olympiad, and 120 inventors from 37 countries participated.

TBILISI, DFWatch–International Young Inventors Project Olympiad (IYIPO) for scientists and inventors was organized in Tbilisi from May 3 to May 5.

The exhibition lasted for two days and a jury of teachers and professors selected winners in four fields: physics, mathematics, engineer, modern technologies and natural sciences.

During the Olympiad, participants from abroad had an opportunity to present their country. Foreigners stayed at the families of their peers in Tbilisi and came from all around the world – Europe, Asia, America and Africa.

IYIPO is held every spring and pupils from seventh to twelfth grade can participate with their own inventions.

The deputy education minister said at the closing ceremony that the project offers an opportunity to children from all around the world to share their original ideas with each other, but also to make new friends and promote their country.

“The most important result we can have is the development of creative ideas and sharing,” Gigauri said.

Ana Makharashvili, one of the winners, had a project about cleaning pesticide-contaminated soil with the help of plants.

Davit Kakhiani, also a participant, presented a program he had created with two friends which allows a person to manage a computer from any location via telephone, tablet or other device. Dimitry Kulaevay representing Ukraine also presented a program.

Suleiman Tudorov from the US participated with an underwater robot which allows cleaning water from polluted substances.