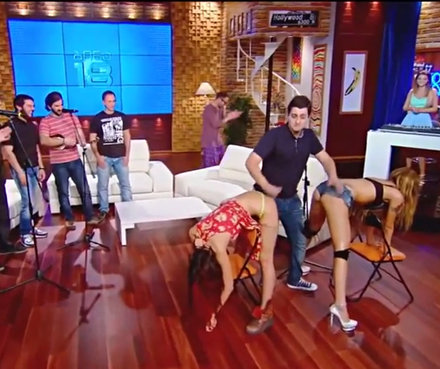 TBILISI, DFWatch–A TV show on Thursday has stirred controversy for showing a man performing music by slapping his hands on the bottoms of two women.

Human rights activists as well as the ombudsman say the segment was sexist and serious discrimination against women, but neither the TV station nor the show’s host plan to apologize.

Bina 18 (or apartment 18) is a humorous show with a monologue, photo and videos in the beginning, and then various guests are brought in to perform.

This time, a band called Bani was invited to the show. One of its members played a drum set on the bodies of two girls, while the rest were singing. https://www.youtube.com/watch?v=qbFBaUNTRXc

A video of the performance, which was separately uploaded to the Internet, got many negative responses.

“Anti-women, humiliating and sexist, you are a bunch of idiots,” one user wrote.

“Only primitive mind of Georgian man could think of something like that. What can be so disgusting and humiliating for human, and those two just smile there,” another one wrote.

The show was produced by GDS, a youth TV company founded by the son of former Prime Minister Bidzina Ivanishvili. The anchors and producers of the show say they do not plan to apologize, as they think it wasn’t  discriminating. They picked the body of women as musical instrument because they think a woman’s body is ‘more aesthetic’ than a man’s.

Irakli Vacharadze, head of Identoba, which protects the rights of minorities in Georgia, wrote on Facebook that the people who created the show didn’t have enough imagination to see how diminishing it is to use the body of a woman as a percussion instrument.

Public Defender Ucha Nanuashvili on Friday issued a statement about the TV show, expressing concern about its content. He thinks using the body of women as a musical instrument is humiliating and degrading, not only for the girls who were in the show, but for the whole society.

“Evaluating a woman by her physical and biological characteristics, turning her into an object and using ‘as an item’ is sexism, which can bring devastating results for the state of women’s rights in Georgia,” he writes.

He also writes that when the level of violence against women in the country is very high, when they are suppressed every day and become objects of stereotypical, sexist attitudes, find it difficult to raise their voice and speak up about violence, fear and discrimination, it is important to change such attitudes and not strengthen them, and the media and civil society plays an important role in this process.

He called on all media outlets to take this into account and support the raising of awareness among people that this is a problem and stop promoting sexism.