Women in Tbilisi say: We won’t give away the night

Women in Tbilisi say: We won’t give away the night 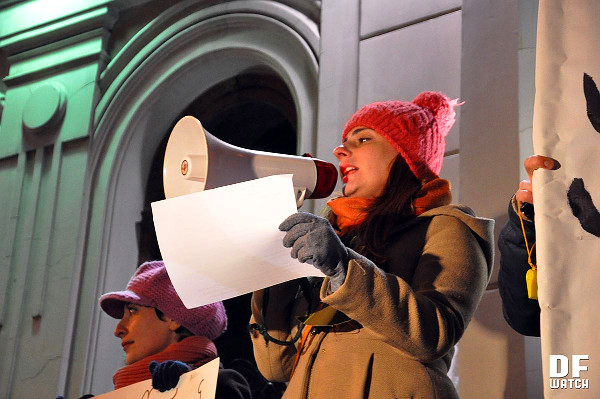 TBILISI, DFWatch–Women carried dresses and skirts as flags through central Tbilisi on Friday to mark the International Day for the Elimination of Violence against Women.

The march was organized by Movement of Women and began from Pushkin Square in the center toward the police station. The dresses and skirts symbolized women who have been victims of violence.

In 2015, the emergency service 112 received 15,910 calls about family violence, organizers said, but the police launched an investigation only in 949 of cases and issued restrain orders in 2,727 cases.

Activists demand the creation of a separate department at the Ministry of Internal Affairs dedicated to combating gender motivated crime.

“The government hasn’t revealed a single case of gender discrimination in any of the femicide cases,” organizers say.

Women’s Fund in Georgia organized a play at the Marjanishvili theatre on Thursday – it was real stories of seven women read by well-known women in Georgia and the first lady Maka Chichua was among them.

After the play, Women’s Fund together with other feminist organizations, including Independent Group of Feminists, walked from Marjanishvili Theater to Deda Ena Square to protest every type of violence.

Their main demands were secure public space as well as a proper legal protection.

It was a women-only event, as only women participated in the demonstration, holding posters, lights and flags.

“Women want a women-only event, because women want to know what it is like to do what men take for granted — take a safe walk on a public street at night without a male protector. Instead, women make each other safe by getting together, refusing to be isolated, refusing to give up the right to travel our streets in safety and committing to helping each other in times of danger,” organizers said.

Two female members of parliament, Tamar Khidasheli and Tamar Kordzaia, proposed a bill to establish femicide as a separate crime. The bill was rejected by the human rights committee and never made it to a vote.

The bill would define femicide as premeditated murder of a woman based on her gender and set punishment for femicide as a particularly severe crime.

The bill also defining it as aggravating circumstances if the crimes seriously or lightly injuring, beating, forcing or threatening are gender motivated.