Woman dragged away from cameras and locked in a cellar

Woman dragged away from cameras and locked in a cellar 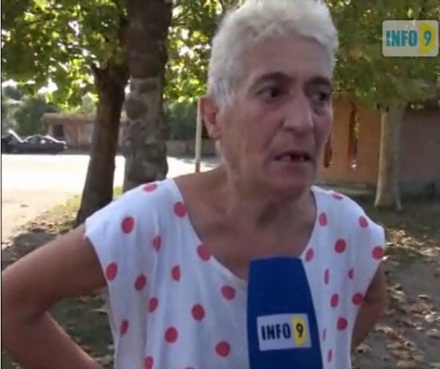 Roza Tskhabelia just wanted to talk to the president, but was forced away and put in a cellar until Saakashvili had left. (Info9.)

TBILISI, DFWatch – An elderly woman who tried to approach President Saakashvili to tell him about her family’s problems, ended up being dragged away from the TV cameras and locked in a cellar Tuesday.

The incident happened in Tsaishi, a village near the western town of Zugdidi, during a campaign stop by the president.

The local woman wanted to tell him that her children are ill and she doesn’t have money to pay for treatment, but a policeman and one other man forced her away. Unable to get to the president, she then turned to a camera crew working for the opposition affiliated info9.

The clip, which is posted on Youtube, shows what looks like a plainclothes serviceman hovering in the background as the woman tells her story, noting that she has no grudge against the head of Zugdidi municipality, Alexandre Kobalia. Then suddenly the man is seen pushing the woman away from the camera, and then dragging her by the upper arms. She tries to cling to a small tree, but one more guard helps drag the woman away.

After the clip ends, these unknown guards forced the woman down into a cellar, where she was kept against her will until the president had left. She was then taken home.

The woman, whose name is Roza Tskhabelia, has told info9 that the guards offered her money to keep silent.

Local correspondents were kept out of Saakashvili’s event by police, who told them it was prohibited to film the president’s entourage.

The president’s spokesperson Manana Manjgaladze says that while the president was visiting, ‘some strangers kidnapped a woman’. She said the president will only comment on this incident after police have studied the case.

The Interior Ministry released a statement saying that two persons, Bakur Malishava and Gia Guguchia, were arrested, suspected of involvment in the incident. A local court handed both defendants a sentence of 15 days in prison.

In addition, the ministry fired the Zugidi police chief, Gela Narushvili. According to the ministry, he attended the incident in Tsaishi, but failed to fulfill his duties and didn’t prevent the incident.

“I’m always a defender of people in need and we already held to account those who stand between me and the needy and this will be the answer to everyone. I’m very angry with them.”

Saakashvili said he the assaulted just like this woman was assaulted yesterday. The president also promised to help her children.