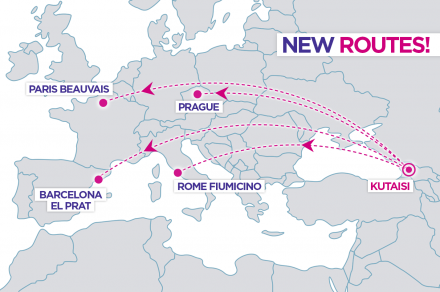 TBILISI, DFWatch–The Hungarian low-cost airline which is already very popular in Georgia may see its popularity rise to new heights after it announced new routes to Paris, Barcelona, Rome and Prague.

“We are truly delighted to announce that starting next spring we will fly you from Kutaisi to Rome Fiumicino, Paris Beauvais, Barcelona and Prague!” Wizz Air announced on Friday.

The news immediately went viral on social media in Georgia.

Wizz Air planes fly out of Kutaisi, Georgia’s third largest city. The company has become very popular due to its relatively low fares.