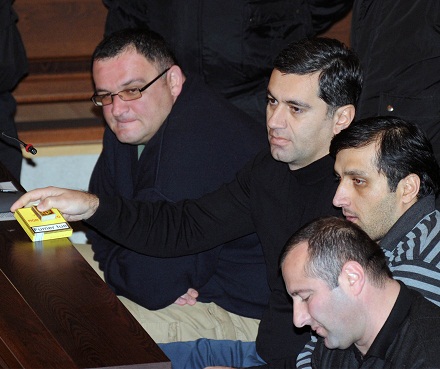 TBILISI, DFWatch — Two witnesses have changed their testimony in the case against Irakli Okruashvili, the former Defense Minister who turned against Saakashvili’s government and had to leave the country before he was sentenced to eleven years in jail.

There are four charges and five cases reviewed in Georgian courts, in which Irakli Okruashvili is involved. Wednesday another hearing was held in the case, in which the ex minister is charged with organizing illegal armed units.

The trial started at 10:00 in the morning and lasted until 18:00. Zviad Kordzadze, a lawyer for Okruashvili, said after the trial that listening to the testimonies of witnesses made a strong impressions on him.

One of them explained in detail that he was physically threatened before his arrest and while in prison. He was forced to give testimony as a witness and then testify against himself.

Kordzadze said this witness had to say that an ordinary car that he just bought was transferred into a ‘weapon of revolution’ in his first testimony. Today he changed the story and said that he was forced to tell the story.

The witness, Givi Iluridze, remembered that during his interrogation he was threatened that they would destroy his family if he didn’t say what they would write into his testimony.

“They made me sign this testimony,” he said, “and then I was convicted for hiding a crime, but released through plea bargain.”

His false testimony was saying that a plan to form illegal armed units was planned at his house.

“But I only heard this information on television, not in my house.”

The third witness, Vakhtang Sarauli, claimed to have seen the preparation of armed units at the de facto border of the breakaway region South Ossetia.

Yesterday, the Prosecutor’s Office dropped two charges out of four.

Today, a representative of the Prosecutor’s Office asked the court to release Okruashvili on US 6 000 bail.

His lawyer said the charges should be completely dropped, but if the court still wants to sanction him, to consider a smaller fine of USD 1 200.

The judge asked for time until at 14:00 tomorrow to make a decision.

Questioning of witnesses will continue January 11. There are three witnesses left to question.