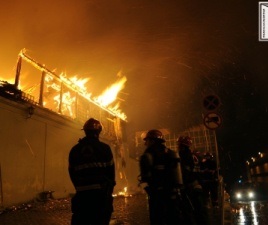 Firefighters are trying to prevent the flames from reaching a gas pipeline. (Interpressnews.)

TBILISI, DFWatch–Three acres of a nature reserve is on fire in Kobuleti, a coastal town in the Adjara region.

According to a reporter for the news agency Interpressnews, the fire is close to the juice processing plant in Kobuleti and firefighters say it is close to populated areas. A gas pipe in the area makes it difficult to put out the fire.

Sulkhan Bazadze, head of the emergency service in Kobuleti, says it is necessary to cross the river to fight the fire, so boats have been sent up the coast from Batumi to assist in the effort. He says the firefighters are doing their best to prevent the fire from reaching the has pipeline.

According to rescue worker Davit Chimakadze, dried grass in a swamp next to the plant is on fire.

Helicopters may also be sent to help extinguish the fire.