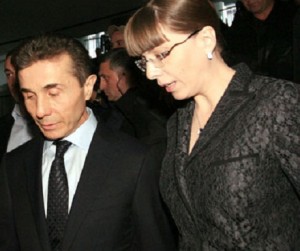 Ekaterine Khvedelidze (right) is suing the Georgian president, Mikheil Saakashvili, for moral damage she suffered because he wrongfully robbed her of her Georgian citizenship. (Photo: Interpressnews.)

TBILISI, DFWatch – The wife of opposition financier Bidzina Ivanishvili is suing Mikheil Saakashvili, the president of Georgia, after he wrongfully revoked her citizenship.

Saakashvili revoked Ekaterine Khvedelidze’s Georgian citizenship last October, at a time when her husband had just declared that he would challenge the president’s power in the country. Revoking the couple’s citizenship temporarily blocked their ascent to power, because a non-Georgian is not allowed to engage in politics according to Georgian legislation.

But a court in Tbilisi ruled that Saakashvili had acted unlawfully when it came to Khvedelidze, and the president later decided not to appeal the ruling. Khvedelidze is now a Georgian citizen.

But Alexandre Baramidze, Khvedelidze’s lawyer, says that she suffered moral damage by this, she suffered mentally and it is fair that she is demanding compensation for this.

Baramidze says that the money amount is not significant, but it is about the principle that the court recognizes the moral damage she has suffered.

In regards to Ivanishvili’s citizenship, the court upheld Saakashvili’s decision. He is therefore still barred from politics, but his wife may do so, and has said she will head the party, which will officially be established in the near future, together with the Ivanishvili’s political partners, the Free Democrats, the Republicans, National Forum and several individual politicians, to form a coalition.