Why do many Georgians give their property to the state?

Why do many Georgians give their property to the state? 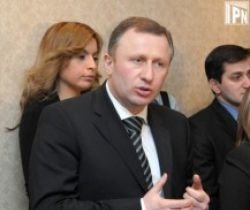 Anzor Kokoladze, the founder of one of Georgia’s most successful electronics chains, Elit Electronics, accuses the authorities of having conspired to take it over. He claims a bank, the prosecutor, the Tbilisi mayor, and a court cooperated on the scheme. Kikodze is currently in jail serving an eigth year term for failure to service a debt, a sentence upheld by the Supreme Court. (Photo: Interpressnews.)

TBILISI, DFWatch – There are many reports in Georgia these days of deprivation of property rights. People abandon their property or donate it to the government right after registering it at the Public Registry, and later refuse to speak about their reasons.

The founder of one of largest electronics chains in Georgia recently released a statement accusing the authorities of illegally taking away his property. He blames the prosecutor’s office of having made a deal with TBC Bank, which he says illegally gained management rights over his chain, Elit Electronics, after it failed to fulfill a loan repayment schedule. As a result, he says, the bank illegally obtained 55 per cent of the chain and transferred the share to Elit Eflaiens, a company founded by the government, for a symbolic price.

While 30 per cent of shares is owned by Bank Republic, the remaining 15 per cent which is still in the hands of Elit Electronics’ founder, Anzor Kokoladze, is to be sold through an auction.

Meanwhile, Transparency International Georgia published a report about property deprivation by the Adjaran Autonomous Republic for a symbolic price in 2011. There are 52 objects transferred directly, according to the Finance and Economy Ministry of Adjara.

Transparency International describes eight cases of transferring property in Adjara. Among them is the sale of 1 556 square meters of property for one lari to the Secondary School of Georgian University, which is the property of President Saakashvili’s mother, Giuli Alasania. The property was formerly occupied by a building housing the Public Registry. All equipment, which was the property of the Public Registry, was also transferred for a symbolic price.

There are 45 cases of selling lands for a symbolic price without indicating the purpose of the purchase.

“One interesting trend that we noted was that properties are often sold to foreign companies about which little information is available,’ Transparency International writes, ’Foreign legal entities need to register locally in Georgia in order to acquire property here, but they often carry out this registration just days before concluding a privatization deal. In addition, information about their beneficial owners is often difficult to find.”

Anzor Kikodze started with small table on the market selling audio cassettes in 1995, at age 21. After a year, he opened a small audio-video shop in the city Batumi. This was the first shop in what was to become the chain Elit Electronics, which is well-known among Georgians. It is now the official distributor of famous brands like Bosch, Siemens, Samsung, Sony, and Philips.

Company representatives say Elit Electronics was temporarily closed in 2009 because of a baseless claim of 7 million lari by the revenue service.

“TBC Bank as creditor, which had mortgaged a 55 per cent share of Elit Electronics, used this moment and gained management rights over the company, which later violated a payment schedule by not paying 5 000 lari. As a result the Bank misappropriated 55 per cent share for 116 000 lari, Anzor Kikodze was arrested and is still facing trial.”

Kikodze was arrested after a request from TBC Bank to the prosecutor’s office. In 2011, Tbilisi City Court sentenced him to about eight years in jail.

The price for Kikodze’s 15 per cent share is 71 000 lari. The auction will end the misappropriation process of Elit Electronics, Kikodze writes in his statement.

“I consider this the continuation of a dishonest, fraudulent plan, with the active involvement of the Prosecutor’s Office, TBC Bank, Mamuka Khazaradze, the Revenue Service, the Tbilisi Mayor and the court, who are using various financial intruments and abusing state authority.”

In 2010-2011 there were many examples of land owners abandoning or giving away land to the government in the regions of Georgia outside of the capital. This was documented in a survey conducted by four non-governmental organizations (NGOs): Georgian Young Lawyer’s Association, Transparency International Georgia, Georgian Regional Media Association and Association Green Alternative.

For ten days in December 2010, twenty cases of giving property to the government and two examples of property being abandoned were observed.

The authors of the reports say people are not talking about the reasons for giving away and abandoning their property.

“It is easy to obtain documentary evidence of mass abandonment or relinquishment as a gift through the Public Registry. As a rule, the examples of property abandonment and giving as gifts were not only concentrated geographically, but at specific points in time as well,” the report says, adding that the majority of these people do not have any real property apart from the abandoned property or the property handed over to the state.

Earlier, people spent financial resources to register these properties. Lands are usually valued expensively. After giving or abandoning lands, a majority of these citizens are left without a real income.

“These cases support the suspicions that these citizens have abandoned and given their property as a gift to the state under duress.”

Another suspicious condition is that people registered the property in the Public Registry just before abandoning them.

The majority of cases were observed in Georgia’s famous resorts Sairme, Bakhmaro and Anaklia.

“79 cases of abandonment of real property by private persons were reported in the territory of Bakhmaro resort. The Public Registry registered the state’s title to this property between January 13 and 25, 2011. The majority of these persons took extensive bureaucratic steps to register this property: they addressed the commission for recognition of the right to ownership, collected and submitted various documents confirming their possession of these land plots, commissioned cadastre map, certified witness depositions at a notary, paid fees, obtained ownership certificates, addressed the Public Registry and again paid service fees for registering the property. After all of this, they abandoned their property, which raises significant suspicions.”