TBILILSI, DFWatch – Georgia has received a stern message from Western diplomats to amend its Labor Code during a conference dedicated to facilitate social dialogue held in Tbilisi on Thursday.

The European Union’s mission in Georgia made its position quite clear: If Georgia doesn’t change its Labor Code, it will get neither EU Association Agreement nor Generalised System of Preferences (GSP+), arrangements which are designed to ease trade with EU member states. 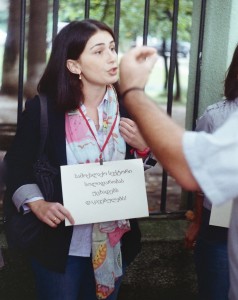 Tamar Khidasheli of Georgian Young Lawyer's Association demonstrating against the imprisonment of striking workers at a plant in Kutaisi who were arrested in September. (Photo: Mari Nikuradze.)

It also became clear during the conference that the Georgian government has eased its stubborn stance regarding the Labor Code which has been fiercely criticized for imbalance in the relationships between employers and employees, with strong tilt towards rights of employers. The Georgian government has justified it by emphasizing that such a policy would lead to more investments to the cash-stripped country.

The conference was funded by the EU and organized by the Friedrich Ebert Stiftung (FES), a German foundation.  In the opening speech Philip Dimitrov, the head of the EU mission in the country reminded the government that it still has some important commitments to fulfill.

He said that the EU had received several signals about instances of employees’ intimidation and even arrests for the purpose to prevent them from speaking out against injustices at the workplace.

Guy Ryder, the Deputy Director General of the International Labour Organisation (ILO), said that there are not only technical problems with the Labor Code, but a broader political will is needed for significant changes to occur.

Matthias Jobelius, regional director of FES, said that all countries have some problems in worker-employer relations, but that what happened to the workers at the Kutaisi metallurgy plant “Hercules” must not be repeated. Authorities severely dispersed the protest rally workers were organizing and arrested several of them after they went on strike to demand better working conditions.

“Arrests and detentions are sign that something is going wrong in the sphere,” Jobelius said.

“The US has invested heavily in Georgia. The country is the recipient of a higher rate of US financial support per capita,” John Bass, the US ambassador in Georgia said.

“We believe that this country will ultimately choose the right direction. I heard comments from the government that they could not change the Labor Code. If you want success, you should do it.”

Andria Urushadze, the minister of labor, health and social security, argued that the Labor Code isn’t problematic. He said that the Georgian government takes into account recommendations from the ILO and that the number of their recommendations decreased 40 per cent in the last four years.

“The (authorities) oppresses and arrests us,” Irakli Petriashvili, the chairman of the Georgian Trade Union said at the conference. “Thousand of our members were urged to leave our union.”

He also said that the authorities are trying to form a quasi trade union under their control.