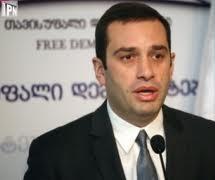 Irakli Alasania led negotiations with Abkhazia early in Saakashvili's presidency. Now an opposition politician, he says there will be a new effort if the opposition wins in October. (Photo: Mari Nikuradze.)

TBILISI, DFWatch – The main opposition bloc in Georgia says if it wins October’s election, it will get back the breakaway republics Abkhazia and South Ossetia through negotiations, with Germany as mediator.

Irakli Alasania, an ex-diplomat and opposition politician who often speaks on behalf of billionaire Bidzina Ivanishvili’s coalition Georgian Dream, said this May 26 on Maestro TV.

“The Georgian President Mikheil Saakashvili has no resources – state or brave resource — to really resist an expansive Russian policy, and this became clear in 2008, when he ran away from the battle field,” Alasania said, himself a veteran of the Abkhaz war in 1992-93.

He spoke about the coalition’s plans to normalize relations with Russia: First of all, Georgia itself should become economically strong and country with institutional democracy. On the grounds of its own strength and democracy, the country will have the opportunity to use the agreement which was signed between the Russian and Georgian presidents after the war in 2008, where Russia has an obligation to pull out troops from the occupied territories of Georgia.

The opposition leader said he things that if the country is strong, it is possible to fulfill this agreement with the EU’s help, and the coalition will start a political dialogue.

“On the basis of my diplomatic past, I think Germany will help us to restore this diplomatic dialogue together with the EU. We will start trade, start relations and finally we will come with a political solution, which means the political coexistence of us and Abkhazians, us and Ossetians and normalization of relations with Russia,” Alasania says.

In June 2011, in his interview with Russian newspaper Maslovskie Novosty, Alasania said that Berlin, Moscow and Tbilisi have traditional, deep relations and Germany can greatly contribute to the restoration of political relations between Moscow and Tbilisi.

“I already had discussion on this issue with German Chancellor Angela Merkel’s adviser for foreign policy issues. We also spoke about Europe’s role in Moscow and Tbilisi relations at the Munich Security Conference last year, where I met Russian Foreign Affairs Minster Sergey Lavrov and EU’s number one diplomat Catherine Ashton.”

One week before the war in August 2008, Germany made an effort to solve the conflict between Georgia and Abkhazia. Former German Foreign Minister Frank-Walter Steinmeier was the first who presented a three-stage plan to solving the Abkhazian conflict; however this plan didn’t work then. Soon it was followed by war in August, 2008.