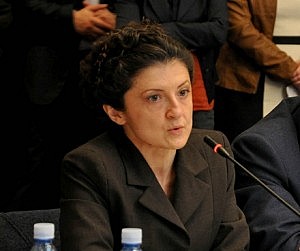 TBILISI, DFWatch–The Georgian government is not in a hurry to go through with the formal procedures that will strip ex-President Mikheil Saakashvilli of his native citizenship after being appointed governor of Odessa and acquiring Ukrainian citizenship.

“Let this issue hang over his head like a sword of Damocles. This is a political decision and we will make it when it is necessary,” Justice Minister Thea Tusulukiani said.

The rules regarding citizenship are regulated by the Constitution and the law on Georgian citizenship, which has precedence over other ‘ordinary laws’.

According to article 12 of the Constitution, a citizen of Georgia cannot be citizen of another country at the same time, but exceptions may be made from this rule.

Since the Ukrainian president’s administration already has published a decree about granting citizenship to Saakashvili, the issue of canceling his citizenship will immediately be brought up. Lawyers explain, however, that Saakashvili is still considered a citizen of Georgia unless this issue is officially registered in documents.

Lawyer Levan Alapashvili told DF Watch that this is a requirement by the European Convention on Human Rights, the purpose of which is that a person should not be left without citizenship of any state. The Ministry of Justice has to request documents from the other country where the person became a citizen.

Saakashvili’s personal authority is crucial for keeping the party together, especially after four of its prominent members recently left it, including the party secretary.

Which is possibly why Saakashvili and his party members claim he is still Georgian citizen and can be granted dual citizenship.

Mikheil Machavariani from UNM told DF Watch that it is possible that president of Georgia, who will decide this issue, will declare that Saakashvili has lots of merits to his homeland and grant him Georgian citizenship, which he deserves.

President Margvelashvili’s parliamentary secretary said on Monday that ‘without a motivational application to the president, Mikheil Saakashvili cannot be granted dual citizenship.’

Apart from a motivational application to the president, he also has to send a document proving that he is citizen of another country.

The justice minister said on Sunday that she doesn’t think it is ‘reasonable’ to consider a ‘rapid cancellation’ of Saakashvili’s citizenship. She explained that formally, he is still citizen of Georgia, unless the Justice Ministry’s Service Development Agency sends a formal request to the president to go through with the cancellation procedures.

She said that Saakashvili granted the government all the means to handle such issues and now they are free to peacefully and calmly decide when to cancel his citizenship. She added that the issue of Saakashvili’s extradition remains on the agenda unless the former president is responsible for his actions.

In October, 2011, when Bidzina Ivanishvili went into politics and declared his goal of removing Saakashvili from power, the government and president suspended his Georgian citizenship, justified formally by the fact that he held a French citizenship at the time. Because of this decision, Ivanishvili and his coalition faced many problems before coming to power.