Wave of demonstrations against election fraud

Wave of demonstrations against election fraud 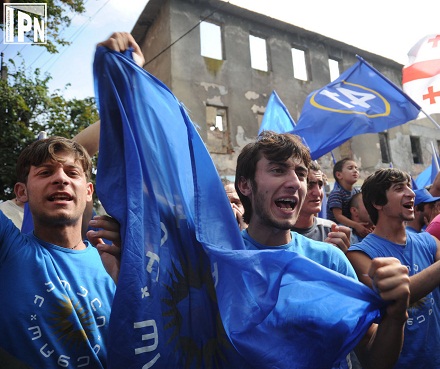 Georgian Dream activists are contesting the apparent win of Saakashvili candidates in Zugdidi (pictured) and 18 other districts, claiming fraud. (IPN.)

TBILISI, DFWatch – Georgian Dream and others are protesting outside the election commission offices in nineteen one-past-the-post districts where the National Movement party is winning.

According to the latest figures from the Central Election Commission, Georgian Dream majoritarian candidates have won in 38 districts, while National Movement candidates have gained victory in 34 districts.

Georgian Dream supporters do not believe these results are correct, and activists are now protesting at several districts where their candidates are losing.

Supporters of the coalition, which won 55 to 40 percent in the popular vote, plan to organize a demonstration in Khashuri, where there were there were witnessed unprecedented scenes election day of special police in combat hear, using rubber bullets and teargas to take control over ballot boxes at several districts. There have been talk of annulling the results in Khashuri, but the district commission decided against it. The National Movement majoritarian candidate is winning in this district.

Supporters of Georgian Dream blame the Central Election Commission (CEC) of lacking objectivity. Coalition activists plan to organize a march from its office to the office of the district election commission.

We are now also witnessing protests in other regions. According to CEC, 19 of their regional offices where the National Movement are winning have been harassed. Head of CEC calls for parties and activists not to interrupt the election administration in its work in preparing the final results.

Bidzina Ivanishvili, leader of the Georgian Dream coalition, called on coalition activists and supporters to stop their rallies, and instead take their fight to the courts and the parliament and solve misunderstandings there.

“Europe is concerned, the U.S. is concerned. We shouldn’t dare street rallies after the heroism that we committed. We are already in power and at least by the end of the month, time is needed to finilize technical procedures and officially form a government.”

Parliament Speaker Davit Bakradze also called on the coalition to stop its pressure on the district commissions as there are court mechanisms to solve problems regarding violations.

“To solve these problems by blocking the commission is not a way out, or fencing, braking doors and physical pressure on commission members.”