Waiting to get away from Metalurg Sanatorium

Waiting to get away from Metalurg Sanatorium 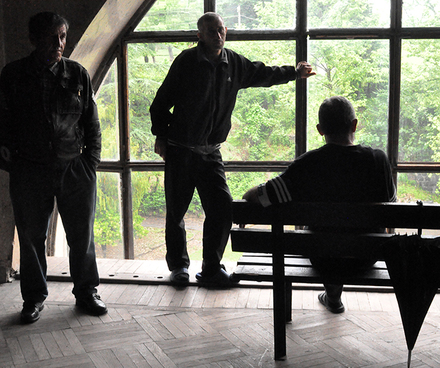 TBILISI, DFWatch–For more than 20 years, Eter, 74, has been living in Metalurg Sanatorium in Tskaltubo, a town in western Georgia. Apart from her, there are 60 families there; all refugees from the breakaway region Abkhazia.

After Eter’s husband passed away, she has been alone, as they never had children. She receives a pension and 60 Georgian lari (USD 36) sustenance for being among the socially vulnerable. In total, this gives her 210 lari per month to live on.

“What I can buy for that? Food? Clothes? Pay my utility bills? I’d rather give them back this money and let them buy all these things for me,” she tells DF Watch. 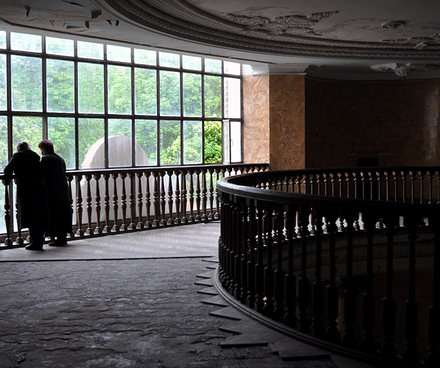 Eter used to be a stylist in Abkhazia, but never got a job when she moved to Georgia. She shows us a blue teapot carefully kept clean.

“That’s the only thing I’ve got from Gagra,” she says.

Metalurg used to be a well-known sanatorium in the old times and has marble and oak everywhere. But today, the walls are cracked, the roof is leaking, the sewage system is damaged and pieces are coming off the walls from time to time.

Residents say not much has changed for them during three governments. The day we visited, neighbors told us that a woman washing clothes was hanging them to dry in the hall when a big piece of the roof fell down on her. She barely survived. 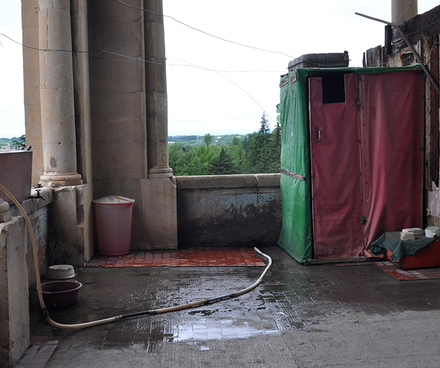 The makeshift bathroom on the balcony. (DF Watch.)

The basement is constantly flooded with water and sewage leaking from the pipes and residents do not have money to fix it.

Lali Bablidze, another resident at Metalurg, says it is almost unbearable to live here.

“A long time ago, this building was so perfect, but now no-one is interested in refurbishing it,” she says, adding that the biggest problem is the damaged roof and the leaking sewage, but in summer, mosquitos and wasps is another nuisance to deal with.

“The building is made almost entirely of wood. The floor is rotten and we don’t have bathrooms to take a shower and wash.”

Small cabins are crafted on balconies as a bathroom covered by tarpaulin.

There is darkness in the halls and a horrible smell on the ground floor, which is partly flooded. 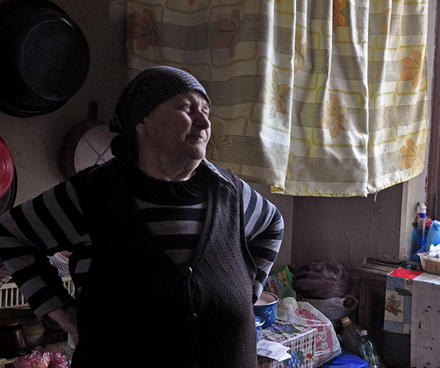 Grandma Maro says she and most of the families use electricity for heating in winter.

“We switch it on for a while and then switch it off, to not run up a big electricity bill.”

She is living here with her son and three grandchildren.

All the residents agree that the building needs to be examined. They want to conduct an assessment of the building, as the basement is flooded with water from sewage and there is a danger that the whole building might collapse. They have appealed to the Refugee Ministry for this but still haven’t received an answer.

Tengiz Aslanikashvili, Deputy Head of the ministry’s territorial body for Imereti, Guria, Racha-Lechkhumi and Kvemo Svaneti, says that Metalurg Sanatorium had its sewage completely blocked a few weeks ago, but it was partly fixed in the beginning of May.

“When I was there I saw that the problem wasn’t completely solved, but it is not urgent now,” he said, adding that the flooded area was partly cleaned. “I am not saying that this problem doesn’t exist anymore, but every problem can’t be solved fast.”

This fall, resettlement will start at three new properties in Kutaisi and about 200-250 families will be accommodated in each of them. It is unknown when it will be possible to resettle all the families who are living in difficult conditions.

Meanwhile Aslanikashvili said they offered residents at each sanatorium to fill in special documents describing that they’re living in unbearable conditions, which will give them the opportunity to be resettled sooner than the others.

Last year, DF Watch reported about the sanatorium in Likani, also housing refugees from Abkhazia. According to the latest data from the Refugee Ministry, there are 85,177 refugee families in Georgia.