Waiting outside, supporting those inside

Waiting outside, supporting those inside 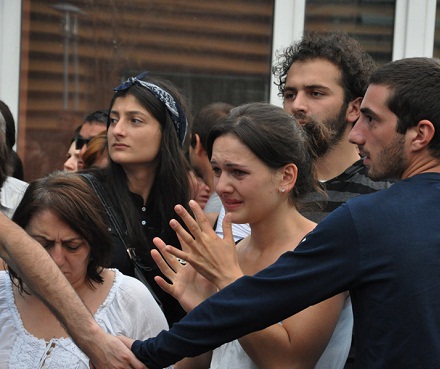 People with relatives inside Gldani prison are getting moral support from students. (Photo: Mari Nikuradze.)

TBILISI, DFWatch – “I bet daddy can see me here,” a boy of about 12 told her grandmother, both standing on a small hill in front of Prison No 8. It was evening and beginning to get dark. His grandmother was counting cell windows, as she knew the cell number where her son is sitting and was trying to calculate where his windows could have been to stand a bit closer.

Friday evening the youth organization Laboratoria 1918 together with students and youth headed to the prison to express solidarity with prisoners after the violent footage of prisoner torture was shown to Georgians.

They marched for a few kilometers in Gladni district, where Prison No 8 is located.

But earlier in the morning a few journalists were allowed to enter this facility together with a priest. Prisoners were allowed to speak with them. They named the names of specific persons who personally committed violence against them and are still employed at the prison. The prisoners say they are threatened that when the rallies and protest wave ends ‘you will see what we will do to you.’

In the morning it was also reported that some prisoners went on hunger strike, but they stopped after speaking with clerics. The prisoners demand that those who tortured them are punished, otherwise they will go on hunger strike again.

One of the prisoners interviewed today said one of the biggest problems is that they demand to transfer prisoners with tuberculosis to a place where they can be given adequate treatment for the illness. He said they are treated with medicines which doesn’t have any effect. Despite a number of promises, those who are ill have not been transferred to the tuberculosis zone.

Prisoners with tuberculosis are now on hunger strike and refuse to take medicines, he said. They say there has been no torture the last few days, but earlier it happened every day.

In the evening students arrived at the entrance of the prison. Followed by parents and relatives they moved from the other side of prison, where cell windows are seen.

Whistling and shouting they cheered up the prisoners who were kicking on cell windows.

When the sun completely disappeared, the prisoners turned off the light in their cells and lit candles responding to rally participants.

People switched on their cell phones, holding them in the air and shouting different messages like ‘we support you’.

Some relatives and family members of prisoners spoke with each other guessing where their sons and husbands may be sitting. Some guessed the places and started calling out their names, jumping and waving to somehow make them know they were there.

Later people moved to the front making different statements. Candles were distributed to all participants to provide light. One of the participants appealed to prisoners: “You don’t need to be noisy there. We know you can hear us. Keep calm, turn off the lights, we are with you, everything will be fine.”

During the rally there were reports from parents that prisoners haven’t been given food for the last few days.

Fireworks were seen today as well. Some of participants let fireworks from a car behind the prison.

Rallies were held on Sunday as well.