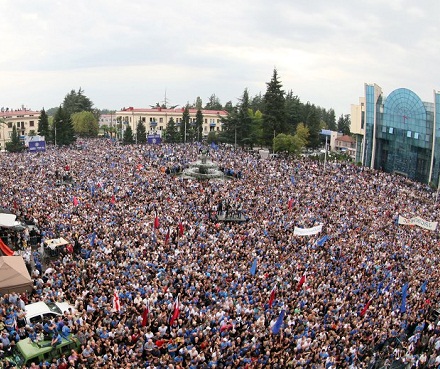 TBILISI, DFWatch – The leader of the government’s main competitor in the election in just over a week says that he has plans to solve the conflicts of Georgia’s breakaway regions Abkhazia and South Ossetia.

The businessman was speaking at a campaign rally Saturday in Zugdidi, a town in western Georgia considered the center of the Samegrelo region. This region borders on the conflict zone and is a traditional stronghold for the government.

The opposition often says that the region is controlled by the Akhalaia family, who are close to President Mikheil Saakashvili. One of the clan members, Bacho Akhalaia, was interior minister, but resigned after scandalous footage of prisoner torture was released in the media and people demanded his resignatino, as he is considered to be behind the torture in prisons.

Data Akhalaia, his brother, is currently deputy defense minister and rumor has it that he has more influence than the minister. Their father Roland Akhalaia for years was chief prosecutor of the Samegrelo region. Now he is a majoritarian candidate (single mandate district) for parliament for the ruling party.

Despite the influence of the Akhalaias in the region, more than 50 000 people attended Georgian Dream’s rally, which is quite an impressive number. Participants at the rally also said that many people weren’t able to attend because of traffic jams when a large number of cars were trying to get there in time.

Bidzina Ivanishvili, leader of the coalition, said that the number of people attending the rally is very important.

He addressed the recent events in the prison system by saying that today, the dignity of people is being violated.

“As if Saakashvili opened doors to the west, but in fact, he brought torture and rape of Georgian men. Each of his supporters, who will find any justification to those executioners, will become executioners themselves. The democratic west will now see what this beacon of democracy really is here,” he said, adding that Saakashvili is concerned about the latest revelations because information about it was leaked, not because it happened.

The coalition leader called on people to show restraint until the election and promised that from October every guilty person will be punished.

Ivanishvili spoke about his election program and focused on health care, education, social issues and the development of agriculture. He also addressed the question of how to solve the conflicts and the problems refugees are facing.

Allocating money or other kind of allowance for refugees has become shameful political corruption, because the government helps them instead of political dedication, he said.

The coalition leader stated that Georgian Dream will consider restoring rail and road traffic with Abkhazia.

“Railway and car highway will open the way for Georgians and Abkhazians to the Russian market, which will be important for our economic growth,” he said, and added that reopening the railway line will give an opportunity for Abkhaz businessmen to develop their own business and will make them interested in engaging in the Georgian economy.

“I want to appeal to Abkhazians from Zugdidi: we Georgians and Abkhaz people spilt eachother’s blood, and this has no justification. But now it is time that we take care to restore relations, to take care about our common future, time doesn’t wait. We have much in common and we should use this.”

He said his team will not allow any provocations.

“Grounds should be led in Samegrelo to return Abkhazia. We will find an honorable way out of this situation together with our Abkhaz brothers. Abkhazia should return to Georgia by its own will.”

The coalition leader said he has a plan for how to return refugees to Abkhazia, from where more than two hundred thousand Georgian fled a war in the early 1990s. The plan includes how many houses to build, and how much it will cost.

“You should know we have prepared a project for all these things and we will do all of it in peace.”