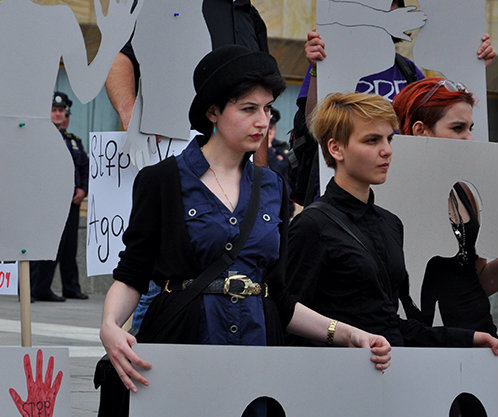 The group Identoba claims violence against women is on the rise in Georgia, and that legislation meant to protect women is ignored. (Interpressnews.)

TBILISI, DFWatch–The rights group Identoba held a demonstration Saturday outside the government office to highlight the problem of violence against women.

The organization, which is most known for having organized a gay rights rally in May 2013 which was attacked by crowds of Orthodox Christian activists and priests, says 13 women have died as a result of violence in the last three months and warns that this is part of a trend.

A few tens of people participated in the demonstration, whose goal was to show support for women and protest against violence.

Participants said, legislation in Georgia looks like it offers full protection, but the law is actually ignored.

Irakli Vacharadze, head of Identoba, told journalists that the main problem is that the Orthodox Church and the government ‘are telling people that it’s ok that there is violence against women, who should be subordinate to her husband.’

He said there is a law which says no-one’s rights must be violated, but nobody is following this law.

Some of the posters at the rally read “Women are beaten in Georgia”, “Son killed mother”,“Don’t finance violence with my money”, “Don’t hide, don’t be silent”, the latter referring to women who remain silent and don’t speak up about violence.